PROMISED BY PROM by Jessica Bucher and M.F. Lorson 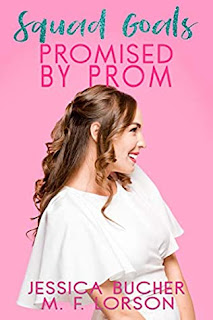 Rating: A cozy sweatshirt with your high school mascot on it

Summary: Nora's goal for spring her senior year is to find a serious romantic relationship by the end of the year so that she'll be less upset her friends are going to college in other places and she isn't. And to not be distracted by her friend's brother, because he's off limits.

Would you read more from these authors? Absolutely.

This is the third of the Squad Goals series, and my favorite. It ties everything up in a way that had me misty eyed, leaving me feeling like my actual friends were about to separate and go on adventures apart from each other. It's pretty amazing how much I grew to care about these kids over the course of the series.

Like the first two books, Hot by Halloween and Nerdy by New Year, Promised by Prom focuses on a group goal. In this case, Nora wants a serious boyfriend by the end of the year in hopes it will make her feel more like she has a local life when her friends leave for college. So she decides to find some guys who aren't leaving town and go on some dates.

Meanwhile. Max is the brother of one of Nora's squadmates. This puts him off limits, although he doesn't want to be and although he's a year behind them in school and planning on going to the same community college as Nora rather directly into a four-year university and thus will be in town for several years. And he doesn't like this goal at all, which he knows about because he snooped in the book they write it all down in a few novels ago when his sister had it. He's always been the amusingly goofy younger brother of her friend, but he's a friend of Nora in his own right, too. It will have been obvious for some time to readers of the series that the two belong together, and Max is aware of it from the start. But Max knows he can't force Nora's heart, so he watches her go on a series of dates and comforts her after the ones that go all wrong.

Nora likes Max. A lot. But she's never considered dating him for two reasons: 1) She thinks his sister will flip and 2) she thinks he's a bit of aplayer. She's actually right about the first one. But it's quickly apparent to the reader that the reason Max has a string of casual relationships that he cuts off the second he gets the impression the girl is getting attached to him is because he's been in love with Nora for years. He's not sure how to explain that to her without freaking her out though.

The shifting relationship between Max and Nora is incredibly sweet, extremely tender, and sometimes heartbreaking. It's one of those books where you're pretty sure the couple will end up together, but it still hurts to see them make choices that keep them apart.

The resolution is a happy one, although it was also bittersweet. There's a gathering in one of the closing scenes where Nora watches her friends and their boyfriends reflecting that this may be the last time they're all together. And she's right. No matter what, they're unlikely to ever be as close as they are in that scene again.

The book concludes with the Squad Goals notebook being handed to a younger sister who is told to form her own squad and continue the tradition. I hope she does. Maybe if we're lucky we'll even get to read about it.

This book is a great entry in the fields of friendship-to-romance and forbidden-partners-romance. It also also concludes a fantastic series about positive female friendships. I highly recommend readers start with the first in the series and read all the way through for the fullest impact.


6% Well, yeah, Max, you could try to make the goal go away. Or you could just make sure it applies to you, you doof.

10% Now you're on the right track, Max.
Also, I'm loving the dynamic Gray and Simon have developed.

12% Max is coming really close to being honest with Nora already. And she clearly likes him, even though she doesn't seem to know it. What would happen if he followed Simon's advice and just talked to her?

23% But WHY haven't you considered dating Max, you silly person? .... Apparently it's 100% that Addy would freak. Well, Addy can get over that.

27% Ok, and she thinks Max is a player. Which I guess makes sense as she doesn't know why he hasn't been serious with any of these other girls.

31% He's totally not wrong that a date should be as easy as hanging out with a friend. He was also right that she didn't actually need rescue in this case. She really was free to drive home.

33% A more astute girl might wonder why Max remembers the guys she's gone out with better than she does... Ah, there we go. "I had no idea you were paying such close attention."

42% There are a lot more typos in this book than the others. Did they fire their editor?

45% Sharing a tent... That... Makes things more complicated, doesn't it? There's nowhere to go if you get shot down. So, yeah, it definitely needs to wait until the end of the festival. Which could make the ride home awkward... Maybe this weekend isn't a good idea.

47% Why doesn't Nora want Max to say he loves her? She's looking for a serious relationship, so it's not that that's too much. I guess she's just scared. It is a scary place to be.

50% um... Not to stereotype, but "Mr Perfect" works in a dress shop and knows what was worn by whom to which awards show. Why are people assuming he's straight?

53% Andrew doesn't make her feel anything. So, yeah, friend material only even if he isn't gay.

60% I like the Avett Brothers a lot, but wouldn't pick them to cheer me up if my heart was breaking. I am really sad for Max.

93% Wait, I am confused. It's been 90 days since prom and graduation is next weekend? Who has prom that early???

94% I'm sad about Gray going to school in California. That's going to suck.

95% Max is friends with Andrew now. Nice. The guy really is likable.

I'm happy for Max and Nora. I think they have a good shot at being permanent. I'm unsure about Gray and Addy. Going to school in different time zones is going to really strain their relationship, so Nora may have been right that the party was the last time all six of them would be together. But I guess most people don't marry their high school loves even if I did, and most people seem to thinking picking schools without taking your significant other into account is reasonable.
at March 23, 2020