MELT MY HEART by A.R. Perry 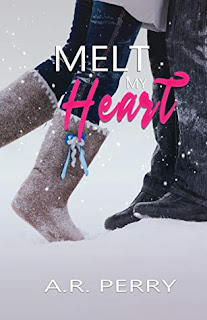 Rating: A fuzzy robe and a room with a snowy view

Summary: Sammy spends most of her senior year spring break ski trip in the lodge, where she meets an intriguing new boy who might be enough to distract her from the fact that she's hopelessly in love with her best friend.

Would you read more from this author? Yes.


Sammy has two problems at the start of this novel: she's in love with best friend (who has no clue) and she's committed to going on a ski trip even though she doesn't like skiing. The fact that she doesn't like skiing was hard for me seeing as my family loves it to the point we're building a house at a ski area. I was also saddened by the fact that the author has obviously either never skied or did it so long ago that she doesn't remember details and thus doesn't realize things like if you're hurting your ankles you have a very serious problem with your boots and it's really hard to fall on your tailbone skiing without having a serious knee injury. (You fall on your side. Falling either backward or forward is hampered by the skis being on your feet. And your ankles are held in place because the boots are tight and hard. First day complaints are much more likely to be about being cold from the snow, being hot from overdressing, hurting your wrist because you don't fall properly, hitting your hip too often, or causing all your leg muscles to hurt because you keep tensing up. Sore ankles and a bruised tailbone sound more like first day ice skating problems to me.) And Sammy's resistance to going to her prepaid lessons had me wanting to throttle her. (PSA: Your first several days skiing should involve a professional instructor. In the States, look for someone who is PSIA certified. Also, when your parents already spent money on lessons, it's pretty bratty not to take them just because you don't feel like it.)

So... Yeah. Sammy came across as a bit of a brat at first glance. Does she think her parents have infinite money that they can throw around on buying her ski passes, lessons, and equipment rental? Even before she got hurt, she clearly didn't intend to ski. Even if she wanted to go on the trip to hang with her friends when they got off the slopes, she could have saved a LOT of money by refusing to buy any of the other stuff she wasn't going to use. (Yegads, I feel old saying all that! But seriously, kid.)

Other than the selfish wasting of money, which is pretty easy to explain by "She's a teenager" I liked Sammy alright. She's the bookish shy-type who undervalues herself and makes me think of teen-me. She'd rather read a book than party and would have bailed when the friend who she trusted to help her on the trip got banned from it if she wasn't such a sucker for Cole's pleading.

I liked Cole more than Sammy herself. He was a good guy who got along with almost everyone, almost to the point that it was a flaw. He tried to get Sammy out of her comfort zone when she needed it and let her hermit-up when she didn't. And I guess he reminded me a bit of my husband with his enthusiasm for skiing and easy distraction at parties, where he would beg Sammy to go but then wind up fluttering around talking to other people and ignoring her. (My husband does that all the time. It has nothing to do with his feelings for me and everything to do with his puppy-like enthusiasm for being around people.)

Potential Love Interest Hudson rubbed me wrong from the get-go, but that could have been because it was so obvious Sammy was going to end up with Cole. Conversely, the guy who was supposed to be an obnoxious jerk struck me as decent and having good intentions overall, but that could have been because I liked Cole from the start and figured he wouldn't hang with someone who actually was an asshole.

The plot had few, if any, real surprises for me, but I don't mind a certain amount of predictability. This is one of those books that isn't about where things are going but how they're going to get there, and as such was a fun and comfortable read that I honestly enjoyed. I recommend it for YA romance readers looking for something cozy and cute.

9% I'm assuming Cole doesn't date because he wants to be with our narrator and hasn't figured out she thinks of him like that yet. Also, I fully relate to whole "He ignores me when we go places" thing. My husband has always done the same thing. It has nothing to do with lack of affection.

12% Yeah, Cole wants to be alone with Sammy. And I don't thinks it's because he had a fight with Eva.

29% Um.. Something is wrong if she's hurting her ankles. They shouldn't be moving much. And you don't really fall on your tailbone skiing, that's more of a snowboarding thing. You fall on your hip and you hurt your knees. ... And, yeah, she should have waited for the instructor.

29% OMG! Why aren't they wearing helmets??? How is their school allowing that?

40% There's something about this guy I don't like. I don't think it's just that he's not a skier.

45% Yeah, I was pretty sure it was Cole texting.

67% I think Ian is honestly trying to be helpful here. Here's obviously trying to get Cole and Sammy to admit to get like each other.

69% A sports car is appropriate for winter if it's a WRX. She has a point about Mustangs though.

72% I strongly suspect Hudson has a girlfriend.

78% Ok, maybe not a girlfriend. But hooking up with other people at the lodge is close.

81% Finding on the slopes when you can ski is hard enough, chica. Wait by the lifts if you must, but going up without knowing what you're doing isn't a grand gesture, it's just dumb.

81% Wait, she's taking steps in the lift line? Is this a gondola? (It isn't. The shuffling behaviour of a newbee in a lift line was just poorly described.)

82% Oooh. Didn't lift her tips. You can get really hurt that way... And they usually stop the lift when someone does that.

82% PIZZA? SHE'S SNOWPLOWING! This is painful to read.

90% Yep, Ian was trying to help. And has been for years because he's not actually an asshole.

91% Yeah, I didn't think Dad would be oblivious.

94% Im glad they're still happy after a year. But I cannot stress enough how much Sammy needs an actual ski instructor.

99% THE END
That was really sweet. I like this book. But they really need to contact PSIA before Sammy really hurts herself or someone else.
at March 17, 2020