HOT BY HALLOWEEN by Jessica Bucher and M.F. Lorson 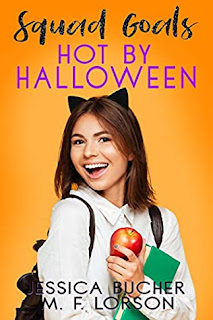 Summary: Addy gets it into her head that her ex dumped for for not being hot enough, so she joins the swim team to get fit and find a new guy to make him jealous. Meanwhile, Gray needs to make a big enough splash to nab a college swim scholarship but finds himself distracted by the girl he's tutoring in swimming.

Would you read more from this series? I have, in fact, already read the entire thing. :)


If you're cringing over the premise of this book, ie that a teen girl decides she needs to be hotter to make her ex jealous, it might help to know that the response of everyone who learns of this goal is to tell her something along the lines of, "You're already hot! But swimming will make you healthier and it's good to try new things, so I'll support you."

This is the first book in the Squad Goals series, although it was the second one I read. Overall, I loved the series, although this wasn't my favorite of the three. Every school year, each girl in the squad trio makes a personal goal for the year. They then divide the year into three parts and assign each goal a time frame. Next they focus as a group on helping the current girl achieve her goal. The first book has Addy saying her goal is to be hot by Halloween. Her steps to this include joining the swim team and finding a new guy so the old one will see them together and regret what he gave up.

The plot is a classic sports romance. Girl meets boy. They help each other get better at their sport. They fall in love. There's a misunderstanding and everything comes to a head a big sports event. It worked really well for me.

There is a lot to admire about Addy. While the whole "I must get hot!" mission is questionable, what is certain is that it takes bravery for her to join the swim team for her senior year when she's never swam competitively before. And she really throws her whole heart into getting decent at the sport when it would have been very easy to give into the pressure to quit. She also does a great job of helping Gray learn that you can be serious about a sport without being uptight about it. And she shows a lot of development over the course of the story, both as a swimmer and as a human being.

Gray, who shares narration duties, is also highly likable. He's a general good guy who is trying to take care of his divorced mom while getting enough attention at swim meets that colleges will send scouts. He just moved to town and he's upset at the start of our story by how uncompetitive his new team is, especially new girl Addy, who is apparently bad enough to bring down the entire team's scores. At first, he wants to get Addy to quit, but he quickly shifts to mentoring her instead, trying to make her a strong enough swimmer that she can hold her own. His main flaw is taking everything way too seriously, but he works on it over the course of the novel.

The Squad is also an important element. They're Abby and her two best friends. Both they and their families play strong supporting roles and I really appreciated how dedicated the girls were to building each other up. And, like I said, they supported Abby's swimming while reminding her repeatedly that she didn't need to be "hotter" let alone be "hotter" to get at her ex, but that it was awesome she was going out and doing something new and challenging. Seeing them waving their signs in the stands cheering their friend on made me smile every time.

This book was a fun read that I recommend to those who enjoy a good sports romance. I also recommend the entire series as a positive example of female friendship.


12% A senior trying a new thing doesn't have a less valid excuse to not know what they're doing than a freshman. In fact, I admire them more because it's harder to get out of your regular zone senior year

24% I wouldn't have thought Gray needed his mom to point out that tutoring is good on applications or that getting someone who could hardly swim to be competitive would be the kind of miracle ability coaches beg for. But at least he knows now.

27% The bell's ringing already? Addy's been in the cafeteria for like five minutes.

34% It's been established that Gray's mom works weird hours, but why doesn't Addy's family expect her to eat with them?

37% I really love how supportive Addy's friends are.

38% Oh, man. That was brutal. Stupid brat with the kazoo.

57% The scene on the dock was adorable.

61% So I'm guessing the conflict in the second half of the book is going to be Gray being upset about the squad goals. But I don't know what's in there that would be upsetting. That she was swimming to be hot? Isn't to get in better shape a valid motive for taking up a sport? Does it specificallysay something like "Make Mitch jealous" that Gray can stretch into including hanging out with him?

69% I very much enjoyed that retelling of the previous scene.

69% Ah, yeah... I can see why Gray isn't going to be happy finding a tickmark next to "Find arm candy to make Mitch jealous."

78% way to fix things, Gray! Threatening not to swim if she doesn't when there's a scout there. Daaaang!

83% Moms are wise. Boys should listen to their moms.

89% Nice lead into the next book. Although I guess Gray didn't read the other girls' goals for the year or he would have known what was up with Lucy and Simon.
at March 18, 2020