BURN THE DARK by S.A. Hunt 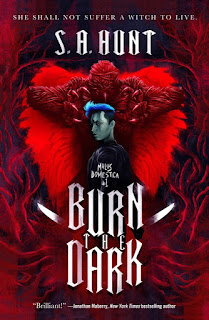 Rating: A delightful chill from a scary campfire story.

Summary: A kickass woman named Robin has a hit YouTube channel featuring chest-cam coverage of her hunting down evil and extinguishing it. Unknown to most of her viewers, this isn't fiction but her real life. When she returns to her hometown, she teams up with a fabulous pizza boy, a war veteran, and the young son of the new school teacher to try to kill the witches who stole her mother from her.

Would you read more from this author? Absolutely. (In fact, I have! See tomorrow's review to see how I like the sequel to this novel.)


First off, a disclaimer. I know S. A. Hunt online and think she is pretty much one of the most awesome people out there. I say this both to be honest and to explain why I picked up an adult horror novel. (Bought a signed copy of it even!)

That said, I'm absolutely confident I would have enjoyed this book even if I'd never heard of the author before. When I read her Outlaw King Series (not reviewed here, but I've been meaning to reread it and write about it) I saw a very obvious influence from Stephen King. That's here too. But beyond that, I consider Hunt's writing to be of comparable quality to the esteemed Mr King.

This is the first book in a series, but I feel it could also be labeled as the first book in a duology. Malus Domestica Books 1 & 2 form a complete story with a solid ending even though Burn the Dark Alone does not. My main criticism of Burn the Dark is that it ends with a cliffhanger. But the second book was set to be released a few months later, so this didn't bother me too much. The release date of the second book has been delayed by COVID-19, but you should still be able to get your hands on it this summer. (I actually scored an ARC thanks to this humble little blog. That alone justifies writing reviews.)

The cast of this novel is amazing. Robin can be arrogant and rash, but she is nevertheless highly likable and easy to pull for. (The arrogance comes from insecurity and the rashness from passion.) She has a complicated history and a lot of potential for the future. I think I'm really going to enjoy reading more stories about her. And her plush mosquito, Mr Nosey. (I HAVE to love a woman who can kill with her bare hands yet travels with a plush animal. And I may need to crochet a plush mosquito in Mr Nosey's honor.)

Robin's childhood friend Joel (pronounced Jo-elle) is remarkably fun. Although he did remind me a little much of Lafayette from True Blood when we first meet him, he soon became his own person. He also has a complicated past and personality, and as a gay man of color in rural Georgia his life is not an easy one. Over the two books, I think he's the character who shows the most growth.

Kenway is a remarkably believable combat veteran, which is a category of person I frequently find poorly written. I suspect this is because Hunt herself falls under this heading. Kenway is also an artist, which I felt was an interesting combination. He's a strong male who probably deserves the label alpha, but he is consistently compassionate and concerned with helping others. When Robin starts to develop a romantic relationship with him, it's very easy to understand what she sees in the guy.

One interesting thing in this book is the existence of Wayne. He and his friends give off a Stranger Things vibe that seemed to me like something we could have seen from Stephen King. He and his dad, Leon, have just moved into Robin's old house, right across the street from the villains of our tale. Wayne's relationship to the evil witches is really fascinating and it's a lot like Robin's used to be when she was a kid. To children, they seem like nice old ladies. In fact, Robin once believed one of them was her actual grandmother. Wayne doesn't exactly disbelieve Robin that the ladies are evil, but he has trouble reconciling that idea with what he's witnessed of them.

The villains are as complex and intriguing as everyone else. They're witches. It's made very clear that Robin has no problem with the common neo-pagan type of witch we see in the real world and that these witches are something else entirely. They were human once, but it's fair to say that aren't now. And they go around doing things like turning people into trees, then watering the tree's roots with the blood of murder victims. In fact, they have to do this, because the fruit of such trees is what makes them immortal. These ladies though... They seriously border on likable. They go for chapters making the reader go, "Well, they don't seem so bad..." and then -bam!- murdered children or some such. Their ability to garner sympathy is probably the most terrifying thing about them.

The plot is compelling and the style of writing is highly engaging. Although when I gave the book to my husband, he said it felt a lot like reading something I had written, so I may be biased on the issue even though I personally didn't really see what he meant. He also reported enjoying the book, but didn't give a detailed critique of it. I didn't let him see the ARC of Book 2, so he's going to have to wait for the copy I preordered to show up to see what happens next.

Although this series is horror, I felt Burn the Dark was more in the paranormal camp and would compare it to Supernatural. However, I will tell you that you need to be okay with horror levels of gore if you're going to read the second book.

Tomorrow, I'll tell you what I thought of the continuation.


5% A plush mosquito who's seen better days. I like that our kick-ass witch hunter owns this.

7% I like Joel, but feel he should hyphenate his name if he wants people to say Joe-elle. Also... He seems more like a "they" to me, but it's not my business to gender other people.

9% I want to live in a copula! Although I also really need to NOT have a spiral staircase between me and the bathroom at night...

25% Okay, evil thing in the bathroom was creepy.

38% I appreciate that good witches are a thing.

46% Hmmm ... Something powerful enough to scare the elder witches... I'm suddenly wondering if that thing following Robin around actually means her harm or if it could be protecting her.

51% I was not expecting a giant clown face in the middle of the woods. The kids are right; that is creepy. I wonder what a rollercoaster car is doing or there ... Abandoned amusement park. Cool. (Is the monster really just the grumpy old man who ran the place in a mask? Probably not...)

53% Ah, shit. That was a copperhead, wasn't it? Bit by a copperhead is some bad business.

57% Drugged by a tender hookup. Also bad business. (And was that the gardener? I can't remember his name, but he's tall and red headed and dresses like that...)

69% If I were in Joel's situation, I don't my think I'd go get my car without a cop... Although I guess he is taking a combat vet and a witch slayer. That might actually be better. ... Also, he says the guy doesn't know where he lives but seems to have forgotten that the guy DOES know where he works.

74% Saying that Wiccans worship Hecate seems a hair misleading. She is sometimes invoked as an aspect of the Lady, but she's not a primary focus. And, of course, saying neopagans worship someone should ALWAYS have the word "some" before neopagans because "neopagan" an umbrella term.

85% Hmm... Maybe Wayne's mom was a different sort of witch? Something Asian that gets its powers in a different way? (Not sure what all this about Chinatown is. Her name is Japanese... As are yokai, although those could be a concept Japan got from China centuries ago. And in a lot of cities, Chinatown is just generically Asian.)

91% So Robin's biological father is a demon? Interesting.