WE BROKE THE MOON by Masha du Toit 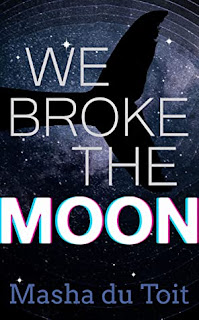 Would you read more from this author? I have read other works by her and recommend them all, so definitely!

Summary: A great ship sails through space. This is the story of a few of its residents.

Note: I was lucky enough to receive an ARC for this novel due to an acquaintance with the author. I do not believe this affected my judgement on the quality of the story as I did not know her when I first read her earlier works and they were also well worth reading.

We Broke the Moon takes place on a massive ship named Tohora. The Tohora is something called a "korf ship." It took me a bit to figure out that korf ships are massive spacefaring vessels made of rock lined with artificially created skin and controlled by computers based on whale brains. This last detail is why the ship is frequently referred to as "the whale." I can't pretend to understand the science involved in the ship, but I found it intriguing. We learn more about the ships in as the novel progresses, but to say more would be a spoiler.

The crucial part of the backstory for the ship is that several decades ago the ship's AI started trying to kill people. We don't really know why at the beginning of the story, just that the result is that the shipboard government has banned all AI's and most interactions between computer systems. The local teenagers, being teenagers, have found ways to bypass the government protections for social benefit. This is to have a massive impact on the plot.

Although the story is told in third person, it is a close third that alternates its focus between two teens.

The first character we meet is a young man named Maksim. He grew up in the fleet of small ships that travel with the Tohora and moves to the new ship for an apprenticeship. He's a highly likable character made more sympathetic by a tendency towards migraines and a complicated relationship with his mother. He is assigned a host family full of children, a situation that takes some adjusting to as he grew up the only child on his home ship. He begins to train with two different sections of the ship's crew, the section that maintains and flies a small fleet of defensive and repair ships, and the cyber division that struggles to keep the ship's various programs running. Both of these departments bring in interesting side characters who help develop Maksim's journey.

Next we meet Io, a member of Maksim's host family. She has spent her life thus far studying the culture and language of an alien group known as The Travelers in preparation for acting as an ambassador to them should the ship come across more than the three already on board.

The pair start off poorly with a lot of misunderstandings and assumptions, but develop a friendship as the novel progresses. It was nice to watch them get to know each other, but also to see their relationships with others. I hope I am not spoiling too much when I confide that they do not develop a romantic bond. Despite my inclinations towards romance, I was perfectly okay with this as the relationship they do have is satisfactory.

The surrounding cast is strong. Io has a large family, led by three mothers. In this world, "mother" is a gender-neutral job title and has no implications of genetic relationship, something that I found fascinating and appealing. She also has many well-developed siblings, some older and some younger, some male, some female, and one nonbinary. It is the nonbinary sibling who is given the book's only romantic arc and I appreciated the respectful way that their nonbinary nature was established purely through the use of they/them pronouns, implying no one considers it something to remark on.

The ship is peopled by folks who seemed very real to me, like they had lives when they weren't on the page even though I didn't know what they were up to. And the society is complicated. They are mostly what we would consider very socially progressive, but have the occasional hangup or bias that is in conflict with the general attitude of acceptance. This complexity adds vibrancy and makes the setting more believable.

Like much of my favorite scifi, it is impossible to read this without reflecting on the moral messages of the portrayed society. We are shown a world that has darkness, where bad things happen, but where optimism, tolerance, and sympathy are all highly valued. The author describes this book as hopepunk scifi. It has a lot in common with cyberpunk, but with less pessimism on human nature. I would be happy to see more in this vein.

All in all, I really enjoyed this book and would be curious to see more stories set in this universe. Our main characters are left in good places, on the brink of starting new things. I would be happy to see what these things are, although I'm torn on whether I would want to see it from their points-of-view or with them as supplementary characters in someone else's story.