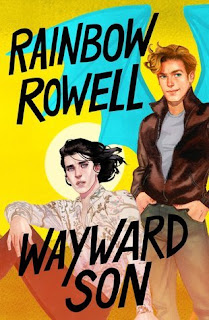 Rating: A classic muscle car on a dark deserted highway with a radio playing a commercial-free rock station.

Highlight of note: Magic-wielding Brits on a roadtrip across the US.

Will you read more in this series? YES! As soon as more is published.

Several years ago, I was at a party in Pennsylvania where an enthusiastic Englishman told all assembled of his plan to drive to California via the Grand Canyon then back via Mount Rushmore in time to spend a day or two in New York City before flying home. "Sounds great!" we said. "So how long are you here for total? A month?" The man blinked and told us he was planning to do all of this before the next weekend. He clearly had absolutely no idea how far from each other any of these places are. I thought of him during this book when our heroes suddenly realize that driving from Chicago to LA is going to take them more than a few hours. "How was I supposed to know all those little states are the size of France?" the mastermind of the plan exclaimed. "I've never even heard of Nebraska!"

This book takes off after the conclusion of Carry On, which you may remember I enjoyed. Simon Snow has defeated the big bad guy and saved the world! (Or the wizarding world anyway.) He hooked up with the vampiric wizard he's been denying being in love with years. And he grew a set of nifty wings. But he also lost his ability to use magic and any sense of purpose he possessed, leaving him a depressed couch potato who has stopped bothering with his classes at uni and lounges about drinking cider all day while he waits for his boyfriend, Baz, to have enough of this and break up with him.

Enter Simon's best friend, Penny. She decides the best way to cure Simon's funk is a change of scenery. She's a bit worried about their friend Agatha, who is attending school in California. So what could be better than whisking Simon (and his hot vampire boyfriend) to the States? They'd land in Chicago, pick up her boyfriend even though he'd told her not to come visit, and take a roadtrip to the West Coast.

As you may be expecting, things don't go smoothly. Not only is the US much larger than the kids realized, but our loveable wizards are hopelessly lost. Physically, culturally, and even, at times magically. You see, the spells in this universe are powered by local non-magical usage. The spells are all common phrases with results that make sense based on meaning. So "Come out, come out, wherever you are!" would help you find your lost keys whereas "Spotless!" will clean its target. The kids know this, so would expect their spells not to work in China, but Americans speak English, right? So why isn't "Sod off!" doing anything to repel those attacking vampires? And even worse than the words of spells sometimes needing to change, there are sections of the country were magic doesn't work at all because there aren't enough human beings saying anything in the region. Oh, and Penny was right to be worried about Agatha. She needs rescuing ASAP.

It's the humor of the book that really made me happy with it, but it came with a good deal of cutting pain as well. Simon and Baz are deeply in love, but not happy. Each of them are convinced they're on the verge of both causing and receiving heartbreak, certain their beloved is about to leave them, and confident that they are going to be destroyed by either this relationship or its ending. In fact, in the opening chapter, Simon comes within half a sentence of dumping Baz to save Baz the trouble of dumping him, completely unaware of how scared Baz is of losing him. They probably just need a really long and deep talk, but they're both too terrified to start one. While the situation could easily have felt melodramatic and manufactured, it actually read as organic and honest.

And on the subject of pain... As someone who breaks out in painful rashes when exposed to sunlight, may I just say that I really felt for the poor vampire forced to drive through the heartlands in an open convertible? It really was a thoughtlessly cruel choice of vehicle, although in Penny's defense, she apparently thought the trip was going to be about three hours long and probably didn't understand how sunny it gets in America.

I remembered loving the first book, but when I reread my review of it, I'd ranked it merely as "like" instead. This one is a solid "love" though. I think the difference may be that I've already been introduced to this universe and am already invested in Baz and Simon's relationship. Also, Baz has narration from the beginning this time, and as he remains my favorite character this may have been a factor. I also think that the new bad guys may have helped because while I wasn't too surprised by them and they were fairly shallow, they were less like Voldemort ripoffs than the opposition in Book One.

There will be at least one more book in this series, which is evident from the ending. While all the main plotlines from this episode get tied up, new things are introduced in the closing chapter that point toward the start of the third installment. I'm really looking forward to it.

1% Simon Snow saved the world. And is now seriously depressed. But somehow I feel worse for Baz.


5% I got a really bad feeling about this Josh guy. If nothing else, why is he dating a socially awkward teenager? Sure, she's college aged, but...

11% 'everyone in America seems to drive a military transport' Snort! Indeed.

16% Brits never do understand the size of this country.

17% Yeah, making a vampire drive across the US is ridiculously cruel.

45% I like Shepard. I wonder how he'll make it back into the narrative. Since he got his own POV chapter, I assume he will.

48% So, I'm guessing Braden knows Agatha is a magic user and is trying to figure out how to modify genes so that anyone can do it. Or trying to steal her abilities or magic. Or something like that.

53% Yay Shepard! Although I'm really questioning his name. It's too on the nose...

54% I can totally buy that some mountains are sleeping dragons.

81% Lamb's the King of Los Vegas. Nice. I figured he was someone impressive.

85% You know, now that we've established vampires don't usually kill their prey (at least in the US) the slaughter of several of them at the Renn Faire seems pretty awful.

86% Yes, Penny. You should totally have called your mum. You were supposed to be smart.

88% Yeah, I guess it was silly to believe Lamb didn't want to know how to cast magic. He obviously has series beef with mages. Why help rescue one?

97% They're taking Shepard home to try to cute his curse. I really hope there's going to be a Book 3 about this.