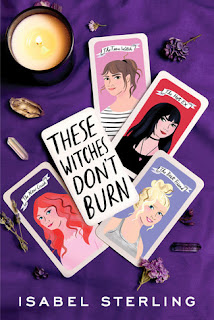 Rating: A sterling silver pentagram with no embellishments

Will you read the next one in the series? Probably not unless I'm really bored.

This book underwhelmed me, I'm afraid. Yeah, it's about a magic user who likes girls, but that's where I stopped being terribly interested. There was a LOT of backstory. It didn't all get info dumped on us, but that was almost more annoying than if it had been. The main character kept talking about the awful thing her ex had done in New York and dragged this out for a good fifth of the book before telling us what had happened. And that thing didn't make me hate the ex like it was apparently supposed to. (It was one of a series of things that together are bad, but by itself? Not so awful really.)

The ending was so thrilling that I was called away from the book halfway through it and forgot I hadn't actually finished reading the book yet.

There were multiple places where I was like, "Why are they doing that? Oh, right. Plot progression," as though the characters were aware they were in a novel so did things that they had no reason to be doing just to move things along.

It's been a few weeks since I finished this book and I can hardly remember anything about the characters. I dimly recall there was a love interest, but the romantic arc left no lasting impression.

This is one of those books that makes me sad because I wanted it to be awesome. Was it as bad as I'm remembering? Probably not? I mean, I finished it. Eventually. But I'm not anxious to get my hands on the promised sequel.

The description states the MC, Hannah, is a witch "but not the type you think" and goes on to explain she does serious magic. But ... If I meet someone who introduces themselves as a witch, I assume neo-pagan, yes. But if a book character is described as a witch, I assume we are talking about Bewitched-style possession of powers and not alluding to her religion.

5% I'm not sure why Hannah is so sure she isn't bi. She apparently didn't know she was into chicks until about a year ago, so did she think she was ace or what?

9% There's a really large and a bit confusing amount of backstory here. This really feels like the third book in a series. Book 1 introduced the series and hooked Hannah up with Veronica. Book 2 was about whatever the hell happened with the blood witch in NY, ending with the girls breaking up. And now we're here. Yet this is listed as the author's first published work. I guess it's supposed to be mysterious and compel you to read on and figure out what happened, but it's just really annoying me.

11% I find it difficult to take Hannah's side in this disagreement with Veronica when we haven't been told what Veronica supposedly did.

16% So, I understand a little more about the breakup. Apparently Veronica was always dominant and selfish and the New York incident was just the example with the most obviously dire consequence. (Hannah nearly got murdered as a consequence, although I'm not so certain it wouldn't have happened anyway.) That Veronica didn't try to apologize or even acknowledge this is a mark against her. Nor did she challenge the statements. She just kept saying she wants to get back together without making any claims that it would be different. In fact, she seems convinced things would be exactly the same.

33% I can't think of any reason for Detective Archer to think Hannah started the house fire other than her being taken to the station progresses the plot.

52% No way would I even consider leaving my underpowered teenager home alone the day after another kid in my coven was attacked by a witch hunter. I'm not sure I'd be willing to be in my house at all. This person knew where the friend lived and someone has thrown a rock through the window. Once again people are doing something where the only motive could possibly be the plot progression.

53% I'm think Benton is the witch hunter. He didn't throw the brick, clearly, but he did take the note off it. And whoever it is recognized Hannah. But that would mean the witch hunter didn't set the fire. At least not on purpose... Maybe he was the target of Morgan's parents, who are actually council witches?

54% Oh, that's right. Benton has a mysterious new tattoo he never got a chance to explain... Yeah, that sounds like a witch hunter thing to me.

63% If the detective is a witch, I'm even less sure why he'd think Hannah started the fire earlier or had something to do with the racoon.

64% um..  I'm pretty sure your don't spend a day unconscious in the hospital and then get released without a heck of a lot of ado.

81% I'm surprised the hospital staff would tell a minor this much.  I feel they would have said, "Your dad is alive and we'll tell your mom more when she gets here."

81% Morgan's a witch! Yay! A blood witch! (I called it!) I'm going to go with an assertion that they aren't all evil.

83% The witch hunter is here because if Morgan's family? I should have figured that out since I thought she was a witch... Although that would take the Halls off the hook and I'm not sure they aren't involved.

86% The detective has an assistant. I'm guessing it's Cal.

87% And now we have to wonder whether what Morgan did actually caused harm... Maybe she broke up a blood clot. Or maybe she formed one. Why is Hannah not wondering about this?

90% Witch Hunter dude has the same tattoo as our friend Benton. Who would have thought? (Other than me?) Still not sold he started the fire he nearly died in though. How confident was he someone would save him? Or was that just when he realized they were witches and someone else started it?

95% And they're saved by the grownups? Really? That's disappointing.

96% And I officially feel asleep midday partway through the resolution. That's not a good sign... Then I went the test of the day forgetting that I hadn't actually finished the book.
at August 06, 2019 No comments: 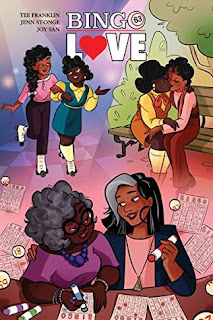 Rating: A dagger of emotion straight to your heart

Highlight of note: I cried all the way through this book and loved every second of it.

Will you read more by this author? Yes!

Hazel met the love of her life in a bingo hall during middle school and they fell hard and fast for each other. There was just one problem. This was the 1960's and they were both girls.

When their homophobic families force them apart and influence them to marry men, the girls start on decades of separation. But then one day, now grandmothers, they walk into the same bingo hall and realize they never got over each other.

This romance is beautiful. And heartbreaking. And sweet. And happy. And gutting. It hits hard and keeps hitting until the very end.

If this had been prose, it might have seemed long and melodramatic. However, it's a graphic novel, which allows us to cover huge amounts of plot in a swift fashion that never drags.

I'll freely admit I don't know how to judge artwork, so all I can say is that the style of drawing in this novel worked well for me. The colors are bold and the lines have a curviness I enjoy. Although it's the plot and characters I'm left reeling over, the artwork enhanced the experience.