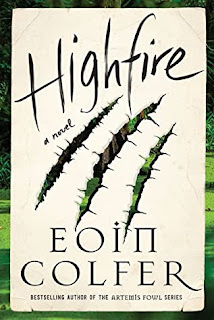 Rating: A pile of awesome t-shirts, a case of vodka, and some excellent shrimp creole.

Summary: A dragon comes into conflict with a corrupt cop in the Louisiana Bayou.

Would you read more from this author? This was not my first Colfer book, nor shall it be my last.


Eoin Colfer has described his Artemis Fowl series as Die Hard with faeries. You could call this book Die Hard with a dragon and not be terribly far off. In fact, now that I've written that I realize that the dragon's voice in my head sounded a heck of a lot like Bruce Willis.

Wyvern Highfire was once a dragon lord. But then the humans killed off most his species and he went into hiding. Now, he hangs out on the Bayou drinking vodka, watching reality TV, and commanding the local alligators. He can't exactly pop into town to do his own shopping, so he needs a servant. His current one is about to be absent for a few months, so Vern needs a stand-in. This fact is about the save the life of a human who discovers his existence.

Squib is a Creole teenager. He has a history of conflict with the local constable that's complicated by the fact the constable really wants in his mom's pants. Squib runs a collection of odd jobs trying to help his mom pay the bills and get out of the debt her ex left her in. He's never had a boss like his new one though: Vern the dragon.

Meanwhile, Constable Hooke is a cop who is in service to a New Orleans drug lord, but is just biding his time until he can overthrow his boss and become the crime king of the area himself. But when he kills a man for the crime lord and realizes someone witnessed the act, his plans get accelerated.

This book reads a lot like something from Carl Hiaasen, except it's in Louisiana instead of Florida and there's a dragon in it. It's a great story about a shady loner who grows to care about someone other than himself while fighting against an immoral and murderous law enforcement officer, but told in a way that is more humorous than melodramatic.

This book is billed as an adult fantasy, I think because it has a lot of cursing and violence. I don't think it's a bad choice for older fans of YA though. While many of the scenes don't involve the teenager Squib directly, he is the driving force behind the book and it has common YA themes of self-discovery, the importance of friendship, and developing a willingness to fight for what you care about. Although, to be fair, it is the centuries old dragon who does most of the growing around those themes.

This book is hilarious. There was plenty of excitement, but also plenty of heart. This book has characters you don't always like but do care about, even if it's only caring to see them get demolished. All in all, I loved this book and highly recommend it to people who enjoy dark comedy, action stories, or dragons.


3% The dragon is tempted to screw alligators because there aren't any other dragons. But he worries aren't enough to truly consent. I think like this dragon.

10% The dragon just took his Flashdance t-shirt prior to leaving the dwelling, presumably to murder the dirty cop blowing up explosives nearby.

20% I hope Squib's mama is smart enough not to get tender toward a jerk just because he showed up half dead. She's a nurse, so she should be immune to that, but you never know.

22% Marked for death by a dragon. That is not an ideal situation to be in.

24% I know this version of mogwai is the folklorically correct one, but I just keep seeing Gizmo when I read that word.

31% I'm pretty sure they're not telling the truth the fatality of dragon breath. I would when that will come out.

45% Usually, an attempted suicide would be triggering for me. This one wasn't though. Not certain why. Maybe because of how detached it was.

60% Constable Asshole is writing a check his ass can't cash picking a fight with Vern.

71% This rescue sequence is remarkably sweet for what is fundamentally a series of murders.

92% Hooke eaten by alligators is less satisfactory than i would have thought.

99% Nice ending. I hope Vern finds other dragons, but if not at least he has humans to care about.