NERDY BY NEW YEAR by Jessica Bucher and M.F. Lorson 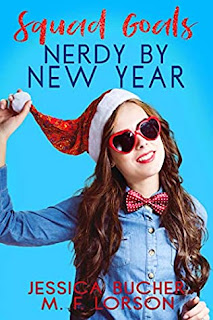 Summary: Years ago, Lucy betrayed her best friend Simon and they've hardly spoken since. Her goal this fall: make things up to him and regain his friendship.

Would you read more from this series? I have, in fact, already read the entire thing. :)

This is the second in the Squad Goal series. Like the first, Hot By Halloween, it features a trio of friends coming together to help one of them with a life goal. In this case, we're working on Lucy's goal to regain the trust of her once-best-friend Simon after two years of estrangement. This involves joining the service club he leads and making an effort to show that she can be nerdy. (Or geeky as I prefer to think of it.) Losing Simon has haunted her their entire separation and she's willing to do anything to get him back. Either as a friend, or as she suddenly realizes she'd like, as a boyfriend.

Having read the description of this book, I started out thinking Lucy was going to be a mean girl. She wasn't though. Not at all. In fact, she's very nice to everyone and is popular because she's likable rather than because she's worked the system and made people afraid of her. Her concern for the birds at the rescue she starts working at midway through the book is beautiful. And the betrayal of Simon from years ago wound up being something that it seems like they could have resolved back then if they hadn't had the instinct to avoid each other. It was a mistake more than a calculated action, a matter of trusting someone she shouldn't have and then not knowing how to properly resolve the problem.

Simon was also easy to cheer for. His main issue is that he hide from conflicts rather than resolving them, so when his best friend hurt him at the start of their sophomore year, his response was to not talk to her for for two years. It's an interesting contrast to the fact that he heads the school service club, working hard to solve problems that his peers too frequently ignore. But I suppose he isn't the first person to find it easier to wear yourself out cleaning up riverbanks and helping charities than it is to make yourself emotionally vulnerable with the people you care about.

Both Lucy and Simon grow over the course of the story. When it looks like the same thing that originally tore them apart is happening again, they initially react the same way, but quickly realize what doing that before cost them and work to resolve their problem without losing each other again.

Once again, the Squad is an important element with Lucy's friends and her younger brother (who isn't Squad, but is somewhat Squad-adjacent) playing strong roles. The girls really go the distance in this one, even when it means doing humiliating and embarrassing things in front of the entire school. I continue to love the degree to which they have each other's backs.

This book is a good stand-alone and can be read without the other two in the series. In fact, it was the first one I read. The entire series is worth reading though, and it would be better to read them in order. I recommend this novel for  fans of cute teenage rom-coms and the series is excellent for those wanting to see positive female friendships in action.


1% I'm with her on goals. Everyone talks about how important they are and that having them is actually more important than meeting them, but it's depressing how often I fail to reach them.

2% Okay, so her friends are mean TO HER. They must be horrid to everyone in general. Lucy probably is to, but she has already said she feels bad about her ex, so she seems more redeemable. And possibly not so bad. She may just go along with the bitchy rather than actively contributing, which, of course, reminds me of Rina and makes me think she could be okay.

3% Now they don't seem so mean. And they like making amends as a goal. So maybe they aren't awful?

17% I haven't figured out what "the incident" was, other than something so bad that best friends stopped speaking to each other for years. I like that Lucy thinks she deserves to feel weird but wishes that Simon didn't have to as well.

20% Wow. Trevor is an asshole. I'm not sure he deserved an apology.

40% Things seem to be progressing really well. They both are aware they're into the other. Is it really going to take another 60% of book for them to realize it's mutual or is something going to mess things up? Asshole Trevor maybe?

60% Nice first kiss. Read it twice. Still wondering what is going  to provide a challenge for the rest of the book though.

67% Is the obstacle to overcome in the closing third going to be the pneumonia Lucy catches wearing something with spaghetti straps to a rooftop New Year's Eve party?

80% The text says Simon pointed to start the playback, but I think it was probably Max...

THE END
Very sweet. I am happy. I'm going to read the other two. It'll be a challenge to read the first one though. I want to jump into the third.
at March 19, 2020