THE AFTERLIFE OF HOLLY CHASE by Cynthia Hand 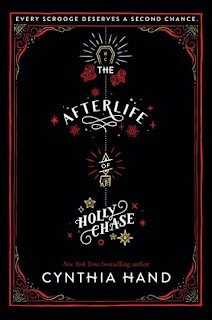 Rating: A fluffy hand muff suitable to go caroling with

Highlight of note: The tale is told by the Ghost of Christmas Past.
Will you read more by this author? Probably.

Charles Dickens is dead. But his image for Christmas transformations lives on with Project Scrooge, a paranormal organization that picks a Scrooge every year and sends a series of spirits to reform this person on Christmas Eve before they can die alone and unmourned.

Project Scrooge has several offices around the world, each serving a different location. Holly Chase is chosen by the New York branch once year, but the stubborn teeanger has seen too many movies with excellent special effects to take any of what happens to her seriously and fails to find redemption. She dies in a freak accident days later, at which point she finds herself being given a job posting as the Ghost of Christmas Past.

Fast forward five years. The now seasoned Christmas spirit is an established part of Project Scrooge and knows her job. But when this year's Scrooge winds up being an attractive boy her age, she has trouble remaining objective. She quickly finds herself breaking the rules in order to actually meet, and even date, the Scrooge.

As expected, Holly starts out as a complete brat. There was a reason she was selected as a Scrooge, after all and we get to witness the horrors of her living life. But as she tells us about who she used to be, she fully owns up to being terrible and it's easy to see that while she still hasn't completely transformed, she's well on her way. She's at least gone from being worthy of portraying Scrooge to being no more self-centered than the average teen.

The love interest is interesting. That he was selected as the current Scrooge indicates that he is far from perfect. For most of the book, we see him through the eyes of someone crushing on him, though, so he doesn't really seem terrible enough to be a Scrooge. This changed during his Christmas Eve experience, which made me go, "Ah. Okay. I see it now." Part of that comes from now seeing him through the lense of the Ghost of Christmas Present rather than watching scenes from his childhood and then seeing how he treats someone he's dating. Sure, he's nice to someone who he thinks is wealthy enough that her dad is a member of his private club, but suddenly we get to see how he reacts to homeless people.

I don't want to spoil the ending, but I will say that I really liked it. Holly really grows a lot over the course of the novel, and it's nice to see where she winds up in the end. It wasn't a Happily Ever After, but it did end with optimism and potential for happiness.

Both Holly and her love interest are suitably portrayed, although not terribly complex people. Her coworkers are interesting and I kind of want to know more about some of them. Her intern is very well developed and some of the tech guys seemed real. I was left wanting to know more about the Ghost of Christmas Future, but I guess that being mysterious goes with that job. The Ghost of Christmas Present was someone I spent most of the book wanting to hug because he seems like a complete teddy bear, but there were a decent amount of hints to indicate that he had a whole life going on. And the branch manger is a fantastic almost paternal figure and I kind of want to write a novel about how he goes from being middle aged and obsessed with his job and Victorian literature to finding true love with... I don't know... The Chief of Operations of the Hanukkah Miracle Network? That could be fun.

Overall, I liked this book. I did feel that the author undersold the inherent angst of sharing my birthday (December 26th) and the way that those of us born near Christmas tend to feel about the holiday. She hinted that some of Holly's initial anti-Christmas stance came from that, but she didn't really seem to fully understand the complexity of it. But I was left feeling grateful that at least my parents didn't name me Holly. (Thanks, Mom and Dad!)

6% I have no idea what any of these designer brands are. Are they even real?

7% Yeah, Holly is a complete bitch. A good casting for Scrooge. I thought she was one of the ghosts, but maybe I misunderstood.

10% So the whole spirits treatment didn't work for Holly. I guess that's why get afterlife will tie her into this gig. I've always wondered what would have happened if Scrooge didn't get scared by the Ghost of Christmas Yet to Come. He ALMOST didn't in Scrooged, but it was clear that it was the terror of him that made Cross really care about the rest of it.

10% Of all the characters she could have been named for, she got Havisham. ::shudder::

11% I wonder what happened to the old Ghost of Christmas Past...

12% I like the way this is an ongoing operation with long-term employees. I wonder if the ghosts who come to announce the three spirits are really the people they're supposed to be or actors.

14% Hmmm... And old watch that runs three hours behind. Time travel device? Will Holly end up back at the morning she failed to reformed? Or will she only be able to go back three hours from the present, just long enough to save her love interest?
(Note after finishing: the watch never went anywhere. It was just a watch.)

16% Something weird is up with this assistant. Is she part of a project to help Holly's rehabilitation? Could she be from management or something?

17% I wonder if Holly was chosen because she'd fail to reform and could thus be compelled to take the Ghost of Christmas Past job.

20% I like that there are Scrooge Projects all over the world.

20% Oh... Stephanie could be Evaluation. She's acting like she doesn't know any of this, but I'm stuck on there not being assistants before and on her having higher clearance than Holly. Also, she always makes it back from errands sooner than she should, like maybe there's something supernatural going on.

22% You know, it's nice that they don't put cameras in bathrooms or locker rooms, but most people do things in their bedrooms they wouldn't want watched too...

31% Yeah, Steph is totally not a regular intern.

39% Hmm... What is everyone else party to? Is this a setup to have love redeem both Holly and Ethan? That would explain why Ethan doesn't actually seem horrible. Or maybe this is all still about Holly? If she gets to redo her choice not to reform, will that be a happy ending? It will leave her five years older than Ethan... But maybe they don't have to be together?

42% A file on Havisham talking about her flaws. Yeah, she's totally still a target of this Project.

46% Holly has my birthday! Of course she hates stupid attention-grabbing Christmas. Her dad didn't say anything about traveling with him for her birthday, it was all Christmas and New Year's bullshit. (I feel this detail was added without the author understanding its importance.)

64% Yeah, I'm increasingly convinced this year's project is about Holly. And Steph is running it.

67% Pretty sure Ethan knows the she's lying about running for student body president. Nobody does that halfway through the year, especially their senior year. (Except in that one satrocial Netflix show...)

75% "December 26th. Which is the worst possible day to have a birthday." YES! Actually, second worst. Christmas itself is worse. But, yeah, even if people remember it, none of your friends are ever around for it and everyone is all excited about something that means more to them and it just sucks. I don't care so much at 43, but as a kid? It was a killer annual reminder of my complete irrelevance.

78% My current theory on Steph and Dave is that she's his daughter. And possibly the new Ghost of Christmas Present.

80% Yeah, the fact that everyone knows The Christmas Carol is a major problem with selling this. I think the crew should either address the issue directly or come up with a way to already the Scrooge's memory so that he doesn't remember the story

85% Hmm. Ethan is definitely seeming more like a jerk during this Christmas Eve stuff than he did in his normal life.

89% Yep, Steph is Dave's daughter! And Steph has pointed out that if Ethan fails, he'll be the new Ghost. Which I think is a test for Holly. Will she let him for so they can be together or sacrifice having a boyfriend so that he can live? (Which Tues in nicely to her Dad's movie.) My current guess: she gets him to reform but he dies anyway.

90% Ah. So that's what happened to the old Ghost of Christmas Past.

92% So Boz didn't know what was going on? I kind figured he was pretending not to. But maybe he's still pretending. Dave almost had to have known since he can read minds. And the guy who sees the future probably knew too...

93% So she got hit by another car and now it's six years ago. I did wonder how time travel would affect this story. This also means it's the year Ethan's dad dies, right? She can't date Ethan, but can she somehow become a mentor? Or make it to NYC and save his father... Her dad did want her to go there.

She's right. I want to be upset that the romantic arc didn't end with them being together. But I'm not. It was a good ending.