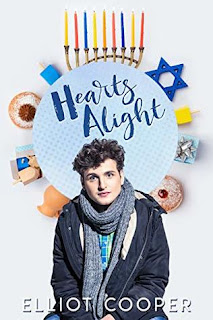 Highlight of note: It's a Hanukkah romance starring a golem. A golem!
Will you read more by this author? I plan to.

Other note: This is an adult romance but does NOT have explicit sex in it.

I mentioned earlier that it's really hard to find full-length Hanukkah romances. That's why I wound up reading this even though its short length would usually rule it out for me. Adding other subplots or switching between points-of-view to show both love interests' sides of the story could have easily grew this into a full novel, but it does work as a novella.

For the first while, I had doubts about enjoying this book. The main character, Dave, is very much against the consumerism he sees in American Hanukkah celebrations, and bemoans this to the point that he's actively annoying. If it hadn't been for the early introduction of his mom, who made my heart warm by very clearly not caring one wit about what gender of person her bisexual son dates but just wants him to find someone who makes him happy, I probably would have abandoned it. I might not have had I remembered the bit about the love interest being a golem, but long enough had passed between me downloading the book and starting it that I had forgotten. It's not actually spelled out in the book (as opposed to the cover text) until about a third of the way through things.

So, yeah... Dave can be annoying when you get him talking about commercialization of holidays. But he's a pretty adorable geek otherwise. He works in a paint-your-own-pottery place and plays online D&D several evenings a week. I did find his relationship with beer unconvincing. Supposedly he's into craft beer, but he more than once drinks a porter out of the bottle. Yuck! When bartender Amit gave him a bottled porter and he started swigging it, I went, "Dude! A worthy love interest, or a half-decent bartender, would have given you a glass!" But apparently Amit was experiencing really severe issues regarding the spell that keeps him alive at the time, so maybe he was just too distracted to protect his crush from making Very Bad Choices. (Note: this is not just me being a snob. What you drink a beer from strongly affects how it tastes and nothing dark is good when funneled through a narrow neck. The narrow neck removes subtleties and sinks the malt profile, drowning them under bitterness.)

Amit is really likable, aside from the whole didn't-give-his-customer-a-glass-for-his-beer thing. He's a golem, and worries about people who know that seeing him as a thing rather than a person, but he is very clearly a person. He was created by someone whose brother had just died as a sort of replacement, which is a bit messed up and I would have liked to get to know his creator more. The spell is starting to fade and part of the story is figuring out how to combat that. It actually gets solved pretty fast and it might would have been nice to spend more time working on the mystery of it. I think I would have liked to see what Amit is like when Dave isn't around. To me, the main advantage in writing in third person is that you can follow more than one character, so I sometimes get a little sad when writers fail to do that, particularly as exploring the way a golem sees the world would be really interesting to me.

It would also have been nice to get to know some of the supporting cast a little better. I already mentioned that I'd love to know more about Amit's creator/brother, but I was also rather interested in the other family members.

I did love this story. My only wish is that there had been more of it. There could have been more time spent developing the romantic tension, more time fleshing out characters, and more time working on the mystery of what was going wrong with Amit and how it could be fixed.

5%. A Jewish bar named Gin Teal. I love it. Although our main character is coming across as rather lecture-y.

12% I like how Dave's mom honestly doesn't care what gender of person he dates, she just wants him to have someone who loves him. I also agree with her that romance novels shouldn't end in death.

23% Dave is drinking a porter out of a bottle. Yuck. If the bartender were a worthy love Interest, he would have provided a glass.

27% A flash of light on his temple scars? Weird.

37% Wait... Golem? I was not expecting that. I guess that explains both the light through the cracks and the name tattooed on his fingers.

45% Current hope: Amit's problem is that he can't serve his purpose, which has something to do with how much his brother needs and/or loves him. He can shift that purpose to being needed/loved by Dave and thus avoid the whole dying thing he's doing. (The early assertion that romance novels shouldn't end in death makes me hope this isn't a tradgedy.)

47% Or maybe he just needs new paint on the tattoo every now and then...

53% He had to touch someone who cares about him. Looks like I was close with my hope.

69% Amit's ranger sounds more like a rogue who's into archery than a ranger to me, but okay. If he's a one shot, it really doesn't matter. One imagines he isn't so his progression will be interesting.

90% A metal D20 for Hanukkah. Yay! Of course, there are eight nights of Hanukkah. In theory, he could be given one of seven dice each night with a nice box for them on the eighth night... A full set of metal dice are pretty pricey though and we all know how Dave feels about expensive Hanukkah gifting.

91% I'm really enjoying the actual Hanukkah celebration. It's really nice that it's an entire week.

97% THE END
Sweet ending. I like that Dave assumes he'll spend other Hanukkahs with Amit. Although one really does have to hope they will stay together since Amit will apparantly die if Dave stops loving him...