ALL I WANT FOR CHRISTMAS by Clare Lydon 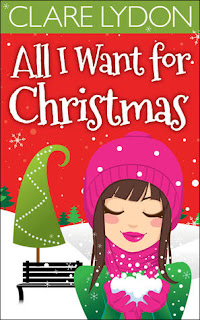 Rating: A mug of hot chocolate with marshmallows on top and a shot of peppermint schnapps

Highlight of note: One of our lead's dates goes so badly she falls asleep in the loo...
Will you read more by this author? Probably. (Especially as I signed up for her mailing list and got a free novel!)

Other note: This is an adult romance and does have some explicit sex in it.

This sapphic romance is enjoyably cute with moments of hilarity. Tori decides in late November that she wants to have a girlfriend to spend Christmas with and figures that surely someone in London must be suitable. So she signs up on a dating app and launches into a series of comically bad dates. During the second disaster, right after she wakes up from a twenty minute nap in the bathroom during which her date bailed, she runs into a friend who has recently become engaged to a woman Tori hadn't met yet. Except when they meet, it turns out they did know each other. In fact, they were best friends in school, up until they shared a kiss and the other girl, Nicola, freaked so bad that not only did she stop talking to Tori altogether, she got pregnant! To say that this distracts Tori from her quest would be an understatement. Not only is her first love now openly interested in women and living in London, but she's a firefighter. Who wouldn't be distracted by that?

Tori's best friend and flatmate is named Holly due to being born on Christmas. (I really need to remember to thank my parents that I'm neither Holly nor Noelle.) I related a lot to Holly, being also tall and gorgeous. Wait. No. I'm short and, at best, cute. But when we find Holly sitting on the couch eating Picked Onion Monster Munch, watching soccer, and telling her friend she'd be happy to write a dating blurb for her but not until halftime, I went, "It's me! If I were younger, taller, and British!" Clearly, she was my favorite cast member.


Nicola was an interesting love interest, although clearly she has a lot of issues, not the least of which is that she's engaged to be married in a few weeks to someone who she's only known for a few months but is flirting and eventually making passes at "The Girl Who Got Away." Clearly, impulse control is something that Nicola struggles with.

And I'm not sure what to think of Tori's coworkers. Between her and her officemates, the same toaster sets of the fire alarm three times over the course of the month this book covers. Each time the buildinging is evacuated and the fire department shows up. If someone in my building did that and still hadn't replaced said toaster, I'm pretty sure I would gift them one for the holidays just so that I wouldn't keep getting forced out onto the sidewalk while I'm trying to work. Also, the fire department probably should have insisted on a new one by the time this had happened twice, shouldn't they?

At any rate... As I said before, parts of this book are riotously funny. And the romance is sweet with a resolution that made me smile. My only real complaint is that I felt like the book could have ended with the chapter that concluded at the 79% marker. The remaining twenty percent had some tie-up value, but nothing at all tense was left to resolve.

Overall, I really liked this book even if I thought it could have ended a smidge earlier. The author has a lot of other books out, including more in the "All I Want" series that covers what happens to Tori and her beloved later, and I will probably be checking those out.

5% They both want a girlfriend by Christmas... Hollywood ending would dictate they end up together.


6% Holly has a history degree and is willing to help, but not until halftime. I relate to Holly.

10% An alcoholic Jesus freak lesbian. Oh, dear. Date One is not going well.

12% Holly is also addicted to Pickled Onion Monster Munch. She is exactly what I would be were I an English lesbian.

13% Mum seems to think Holly is the Love Interest. This may be accurate. I may be biased as she is Young British Me, but Holly is awesome. And she does keep telling Tori things like "I get you," and "You'll always have me to come back to."

19% Ouch. Her first love, who insisted she wasn't into women when breaking off their friendship after Tori's first kiss, arrives engaged to another woman right after Tori falls asleep in a bathroom stall, this causing her date to flee.

22% "...and I pick up the pieces. It's always me." Yeah, I'm pretty sure Holly is in love with Tori. Has been since they were teenagers from the sound of this conversation.

25% First Love (Nicola) is a fire fighter. Wow. Also, they exchanged numbers. If she didn't have a FIANCEE I might start thinking Holly won't get the girl after all.

31% Yeah... Mid-sex thoughts about hurrying to be done before the Tube shuts down aren't good...

38% ROFL. Her date is trying to sell her insurance. That is hilarious.

41% I'm not sure why Nicola is bothering with a fancy wedding dress. She's getting married by the city then just having a reception...

45% Of course it's always Holly you come home to. Come on, girl, figure this out!

56% The toaster set off the fire alarm again? These people need a new toaster. Mine has never once done that.

60% I'm not sure what the point of telling Holly about the Dixie Chicks thing was if she was planning to un-offer them to Nicola.

64% The toaster AGAIN? They really need a new one, STAT.

72% Yay for kissing Holly! Not so yay for her getting concussed, but at least it'll make for a good story to tell people when they're old and grey.

74% In my experience, the weirdest part of someone going from friend to love interest is how weird it DOESN'T feel. So I'd say this is spot on.

77% The last ten percent of the book was a sex scene. I skimmed it.

79% That kinda felt like the ending. Not sure what else there is to do here.

82% Looks like there could be more drama with Nicola even though Tori is certain she doesn't want to be with her now.

88% No drama at the Christmas party, just more assertions they belong together. And apparently another sex scene. I feel the story really did end at the 79% marker