MY NEW CRUSH GAVE TO ME by Shani Petroff 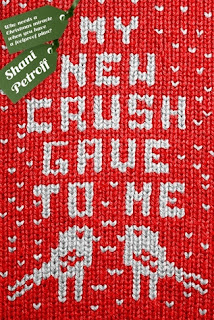 Rating: A cozy sweater with a picture of Santa on it

Highlight of note: Honestly? I liked the book, but can't think of one. Is being exactly what one would expect a highlight?
Will you read more by this author? Probably. I think she's a good choice for someone wanting a comfort read, which I frequently do.

This was a fluffy and fun sort of romance novel with a strong Christmas element. I enjoyed it, but will probably have forgotten most of the plot by next Christmas if I weren't writing it down as it's pretty much a standard holiday romance. There's a big party being held the day after Christmas with a couples theme, and Charlie's date bailed on her at Thanksgiving. Super-planner Charlie clearly needs a plan to get a date ASAP!

When she bumps into a guy named Teo in the hallway, she decides he's the one. She sets up a Secret Santa at the school paper she's the chief editor of and arranges to draw his name with the goal of so wowing him with her gifts that he is eager to date her. Problem is, she hardly knows the guy. So she enlists his cousin JD, who she has a long history of clashing with, to help her get it right. The results are, naturally, at time comedic and frequently made me smile.

Charlie is an over-the-top Type A personality who keeps a schedule synced between all of her devices but also printed out on paper every morning. She gave her best friend coupons for her birthday that grant forgiveness for being late. It's not enough for Charlie to be in control of the moment, she needs to also feel in control of the foreseeable future, to the point of alienating most of the people around her and being genuinely difficult to deal with. I hoped she'd grow out of this as she spends more time with the perpetually late JD, but she doesn't really. The closest she comes is accepting that it's alright to schedule time to relax and ultimately forgiving him for being late to something because he was talking to his senile grandfather. But I guess that's a start and the book does only cover a month of her life.

The best friend character and her long-term boyfriend were excellent. They played the roles of Token Jewish People very well in addition to expertly demonstrating the concept of Established Relationship the Main Character Wishes to Emulate. They took all of Charlie's peculiarities in stride and with good humor. I could wish they'd done more to help her chill the heck out, but at least they didn't let themselves get all uptight worrying about Charlie's self-induced stresses.

The December 26th party bugged me, though. The premise is that Noelle's birthday is on Christmas, so she has a huge party the next day. Problem is, December 26th is MY birthday, so I know full well that over half the people she invited to this party would, in reality, inform her that they'll be out of town. Also, poor Noelle. It's crappy enough being born on Christmas (I frequently say it's the one birthday that's worse than mine) but her parents named her Noelle. Once again, I am left grateful to my parents for not pulling something like that on me. My parents really are awesome in the whole not-inflicting-unwarranted-pain-on-their-offspring department.

The ending wasn't unexpected and felt a little abrupt, but it was happy and heartwarming, so I'm not really complaining much. There is a deleted scene included in the ebook that I would have argued should have been left it. It's an epilogue showing Charlie celebrating her birthday on New Year's that was sweet and served more to ease us out of the book. I'm fairly confident there was a lot of wavering, or possibly arguing, on the part of the author and the editor as to whether to keep it or not with the compromise being to let us see it but not make it official.

So.. Yeah. I don't believe it's possible to have the whole junior class show up at a party on December 26th and found everything else in the book to be incredibly predictable. However, I did enjoy the read and recommend it for anyone wanting a book that will make them feel like they're being cuddled by the Christmas season.

1% Poor Noelle. December 25th is the one day of the year that is worse for a birthday than my birthday. Having a party on the 26th (my birthday) wouldn't work though. No one is in town.

2% I'm betting Jason has interesting reason for being late so often. The other guys I can't blame our MC for not being into. A high school junior who didn't know Canada was party of North America? (And who lives in New England, so should know how to drive there...) Yeah, no one should want to date that guy.

3% Yeah, okay, that could be a meet cute with Teo. But I suspect he's not the true love interest. Also, wouldn't be shocked if he was gay.

3% JD drives her crazy trying to be artistic with his photos for the paper. He has a hard time with deadlines. And he's Teo the Decoy Love Interest's cousin. Sounds like the Love Interest to me.

5% Ok, now that we've met JD, I'll double down that he's the Love Interest. Probably going to be Charlie's Secret Santa too, although she'll try to convince herself it's Teo. (Or maybe it will be Teo, but the gifts will all suck. Or they'll be good but only because JD is behind them.)

9% I suspect Teo is only a candy-striper because he thinks it will look good to college. Same reason he wrote four articles, and only four articles, for the paper last year.

20% Damn, Charlie needs to learn to be less of a control freak.

33% How big is this high school stadium that she can't see the numbers from her seat??? Does she need glasses? (And if it's big enough that's reasonable, how the heck does the entire junior class fit in one event hall? Maybe most of them really don't go to poor Noelle's party.)

40% Nice flower. Either JD stepped in to help his cousin give Charlie gifts or he traded with the person who drew her. (Presumably the gossip columnist who hates her.)

49% Nothing like gushing to the guy who picked out the perfect gift for you about how awesome some other guy is for giving it to you.

54% Not sure what JD was thinking tricking Charlie into fancy dress. Was it an act of sabotage or is he trying to make her see he's more fun than his cousin or did he think Teo would take pity on her and be more attentive? Smart money is on sabotage, but it seems like he's risky a lot pissing her off about it.

56% JD really was right when he said he helps make Charlie better. Which is, of course, the role of the Worthy Love Interest.

70% So Drunk Charlie has the sense to be into JD. How much longer until Sober Charlie catches on?

75% Okay, so Teo is Charlie's Santa. He did the candy cane. JD picked out everything else. Certain of it now.

80% Yep, even a random retired baseball player can see JD is the actual Love Interest.

81% How can she look at that photospread and still convince herself JD isn't into her?

81% Gee, can't imagine why JD would be late for watching the girl he's into throw herself at his cousin... How can that not be something he's excited about doing?

82% Sigh. She doesn't remember telling Teo when her birthday is because she didn't. JD obviously made the book. Teo even said if was made for her, not that he made it.

87% No, Morgan doesn't believe Teo is the one Charlie wants. No one does. Except maybe poor JD.

90% So Teo knew JD was into Charlie and was still willing to let her think he made the planner? That was kinda crap of him.

91% THE END
OK... I guess there's a lot of teasers after the story.
I liked the end. It was swoony. I think I would have liked a scene from later, like them going to the party or hanging out on Charlie's birthday, but I can see why here seemed like a good place to stop.

92% Oh. The one Xtra stuff is deleted scene from Charlie's birthday.

THE END, FOR REAL
I really liked the deleted scene. I would have liked to see it retained as it would have made the ending much less abrupt.