BEN'S BAKERY AND THE HANUKKAH MIRACLE by Penelope Peters 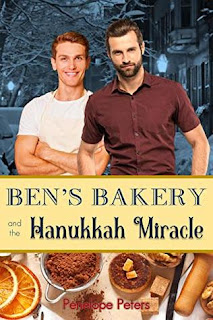 Highlight of note: Hanukkah romances are still rare enough that just being one is noteworthy, especially as it's a full length novel rather than a novella.
Will you read more by this author? Maybe? Leaning toward unlikely.

Note: I am not Jewish. The author of the book is. Not sure if that's important to point out, but both things are true.

Also note: this is an adult romance, not the YA that I usually read. That means there are graphic sex scenes. I skipped over them because I'm not into sex scenes, though, so I can't tell you if there were "good" or not.

I really wanted to like this m/m Hanukkah romance, particularly as it involved a hockey team AND a bakery. At times I did. I liked it enough to finish it at any rate. My main issue was with one of the leads. While Ben is absolutely adorable and quite possibly the nicest man on Earth (to the point that you could probably call him a Mary Sue pretty easily), Adam kept rubbing me the wrong way. Every conflict between the pair came down to Adam questioning Ben's Jewishness. The first time he did it, I was willing to say it was a misstep and him not saying what he really meant to convey. The third time? I was wishing there was anyone else in Boston interested in an overly sweet gay Jewish baker.

The rest of this contains more spoilers than I usually use, so if you're going to rush out and read this book, you should stop here.

Positives about the novel... As I mentioned already, Ben is really loveable and that makes him super easy to pull for. And I adored Adam's hockey team, a rambunctious pack of good hearted teen boys who have a tendency to curse in French due to being from Quebec. I also liked the supportive best friend characters each of the love interests had, especially Adam's female Muslim assistant coach and her constantly-slipping hijab. We never see Ben's parents, but Adam's dad, a retired rabbi who likes to say he's a walking joke because his closest friends are an Islamic Imam and a Catholic priest, is beyond awesome. (The rabbi, the Imam, and the priest like to play golf together with either a Buddhist monk or a protestant preacher because they are all happy running with this interfaith thing.)

There were a few issues though. The first is why didn't the author ever describe the men's "I'm Gay!" forehead tattoos? I assume they have them because random strangers peg both of them as into other dudes with less than a second of observation. This, of course, meant that there was zero tension from the guys playing the "Is he flirting or straight and oblivious to how I'm reading this?" game.

The lack of tension was my second problem. There was never anything other than them arguing to keep the lovers apart. That one lives in Montreal and the other in Boston would seem like a problem, except the guy from Montreal was offered a job in Boston before the book even starts. He's shy about taking it because he wants to be near his dad's nursing home, but it's quickly made clear that his dad can move to Boston too! Neither lead has had a boyfriend in a while, but they weren't left scarred and scared to care by their pasts or anything like that. There is never anything that makes you say, "Maybe it will be hard for this to work out!" except for the repeated fights.

When I say "fight" though, I'm overselling what happens. On multiple occasions, Adam says something horrible to Ben that Ben (and I) hear as, "You're not a proper Jew!" for things like using unusual fillings in his sufganiyot, being awkward with Hebrew grammar, and having parents who like secular Christmas trees. (Adam does this despite the awesome rabbi father who would go ballistic if he heard his son say this stuff.) They then both feel bad. Ben then apologizes profusely. Yes, BEN apologizes everytime he gets upset due to Adam acting like an ass. And although Adam typically responds along the lines of "Why are YOU apologizing?" I never get the impression Adam grows out of it, just that he's found a guy who'll let him get away with being crappy.

The author says in her afterward that she is a Jewish woman who grew up in a Jewish household that always put up a Christmas tree, so I suspect she had to deal with a lot of the same things that got thrown at Ben. And I suspect she reacted the same way he does, by being briefly angry but then shrugging it off. I'd say more about that, but it's not my place.

So... Yeah. It's good that people of Jewish persuasion are writing holiday romances around their holidays, but this one fell flat for me. I may give Peters another shot, because maybe my problem was simply that Adam grated on me too much. We'll see.


Below you'll find the notes I took as I read. Clearly, they contain major spoilers.

1% I'm all for a female youth hockey coach, but why is she in the boys lockerroom? I hope they made sure everyone was dressed before she came in.

5% Yeah, Ben's a great guy, and I can certainly relate to the Christmas fatigue, but it's pretty clear why he's running out of money. I don't really want to see that change though. I WANT him to make choices with his heart rather than his accounting ledger.

6% Adam has a job opportunity in Boston. Isn't that convenient? :)

9% Ok, he really could charge for coffee without being a heartless money grubber.

10% There has been a lot of people assuming strangers are into same sex relationships in this book.

22% Not sure where that accusation came from, Adam, but you certainly did fuck things up. I am actually kinda rooting for another option for Ben to show up now. The fact that he's going to talk to you again demonstrates that he really is the nicest man in the world.

26% Yeah, Ben's totally not the one who needed to apologize so profusely. Glad Adam realized that even if Ben didn't.

32% Sex scene. Sigh. Still haven't met one I wouldn't just as soon of skipped. At one point each if these guys had semen all over their hand without there being any mention of cleaning it off. No hand washing or rubbing it off somewhere, they just continued life with pools of goop held in their palms.

34% Ok, the shower scene was actually kind of sweet.

39% I wonder what else Adam does. Doesn't seem like coaching youth hockey is a full time job, so presumedly he has another job...

51% Ben's phobia of the ice is breaking my heart.

51% Skipped over the sex scene nicely. They enjoyed themselves and it was very tender. All I need to know really.

52% This book is kinda boring. There's nothing really keeping these guys apart at all... The closest is Adam not wanting to leave his dad, and I'm pretty sure his dad would insist Adam move if he knew about the job offer, let alone a job offer and possible eventual husband.

61% Do they really put plastic buckles on rental skates these days? I've always had actual laces...

65% Why can't we have ice cream at breakfast, Ben? Saying it's just for afternoon is silly.

68% Adam is only 27. How is his dad so old? Must have been a late in life baby. Or Dad is really not aging well

70% "I hear they play hockey in Boston too." Dad hasn't even gotten to there being multiple jobs offers in the States and he's already suggesting Adam move! :)

73% I'm pretty tired of Adam being the Asshole Jewish Police. And his dad would be pissed at him. I'm back to wanting Ben to find someone else, because he doesn't need this bullshit.

Also, Christmas trees AREN'T a Christian symbol. They're a pagan one. So get your bigotry right.

93% Adam acts like he's over questioning Ben's Jewish status, but this is the third time he's apologized for the same thing. It makes it difficult to feel really happy about this happy ending.

THE END
Epilogue is mostly just a very long sex scene that I skipped most of. I'm still not sure how I feel about Adam always getting forgiven for repeatedly being a jerk, but I think I'm annoyed about it. I don't feel he really learned much or is better now, he just has a boyfriend who lets him get away with being an ass.