I COME WITH KNIVES by SA Hunt 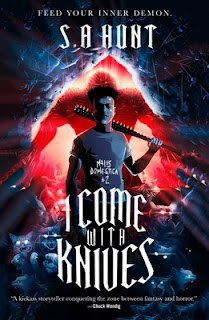 Rating: A studded baseball bat to fight off monsters.

Summary: Things ramp up in the fight against evil in the continuation of the story begun in Burn The Dark as Robin and her friends make new allies to fight old enemies.


This is a direct conclusion to the installment before it and probably wouldn't make much sense if you haven't read the first book. If you have read the first book, though, you'll want to get your hands on this as soon as you can. Its publication is currently slated as July 21st, 2020. I was lucky enough to receive an advanced copy.

In my review of Burn the Dark I mentioned that it felt more paranormal than horror. Whelp, that is not at all true of Book 2. This book ups the gore, the violence, and the evil, making it generally more disturbing than the first half of the tale.

The full cast of the first book is back, although Wayne's friends see much less page time in this episode. I was glad that I really got to know these folks earlier, because they don't get built on much before everything goes pear-shaped and they're fighting not just for their lives but for an entire town of possessed people.

The returning cast shows a lot of growth from the gauntlet of trauma they must power their way through. Joel in particular made me feel like he was someone I knew and was proud of, but they all go up against massive obstacles that really test their grit, determination, and bravery.

The witches are less sympathetic than I found them in Book One and more outright evil. They're done with playing nice and being civil; they're ready to burn the town to the ground and destroy every living soul in it if it means defeating Robin.

There are some new characters in this book. At the end of Book One, Robin's mentor, Heinrich, arrived. I'm not sure if he's not as fleshed out as the earlier characters or if I just didn't like him as much. He makes a lot of bad choices, choices abysmal enough that I'm not sure how he stayed alive to be in this book, let alone taught Robin much of anything. He does a good job of showing the importance of not succumbing to hubris though and I think that his fate serves as a very valuable lesson to Robin.

We also meet the Dogs of Odysseus, a group of magic users who appear to be on the side of good, although I get the feeling that's mostly because it's convenient right now. They are interesting. Although I feel I didn't get to know the representatives of the group very well, I was certainly intrigued by them. There's some promise that they'll be relevant again in later books and this makes me very happy.
The action here is fast paced and seldom receding. If I were to make one complaint against this book, it would actually be that there is too much action. It begins dialed up to eleven, so where is there to go? The book starts out with a punch and never stops hitting, which means I never really got to process what was happening. It also had the odd effect of meaning I could put the book down, walk away, and not be drawn back because it was just too intense the whole way through and it kind of exhausted me. I'm pretty sure this is a personal problem for me as a reader and am absolutely certain that for a lot of readers, the nonstop adrenaline will be a major draw.

The ending is very solid. There's an indication of the direction Robin is heading in next, but it's not a cliffhanger that way Burn the Dark was. If this were the end of a duology and I didn't know there was going to be a continued series, I would have found it a satisfying place to stop. That said, I am looking forward to seeing what happens next.

This is hands down a good book. It is also definitely not the type of book I usually read. What they did to those poor cats will haunt me for a long time. But I am glad that I read it and will be buying the next one when it's published. I received the copy I read as an ARC so that I could review it. I don't at all regret that come publication time the copy I preordered will arrive and expect that my husband will really enjoy learning the rest of the story when Book 3 drops this autumn.

I Come With Knives was meant to be published already. It has been delayed by the global COVID-19 pandemic and is currently slated to be released on July 21st. You can preorder it wherever you like to buy books and they'll get it to you when it's available even if that date shifts again. I encourage you to go ahead and do that should you buy the first book because when that ends, you'll want to know that the rest is coming soon.


5% I'm not really sure why Robin's mom  is lying rather than telling her about everything. It seems obvious Robin isn't going to drop it and I'd think she'd be safer knowing what's happening. I guess she's just really used to the idea that it MUST all be a secret.

7% Alright. The cops have found the crime scene! Guess they'll be believing Joel now. I mean, looks like this officer might be getting killed, but people will have known he was going there. Of course, the cops seems corrupt in the first book, so who knowsif anything will.come of this. It's actually a bit odd anyone went out there.

17% Interesting that Roy didn't kill Deliliah. I guess he figures she's too terrified to tell on him? Or he didn't realize she saw the dead body?

28% Lost to dagger. Got his ass kicked. Looks like he's gonna die. I'm pretty disappointed with Heinrich. Although I think there's a decent chance of Roy dying, at least.

31% Okay. This is completely disgusting. I'm having trouble breathing right.

36% I am traumatized by what just happened to the cat. This book is definitely more gorey than the first.

37% So Big Red was not the gardener but a different redheaded serial killer?

42% So people can be released from the cats without dying. That's good.

49% Lol. Yeah, I've been there with voice recognition not know what the hell I'm saying even though people don't act like I have a speech impediment.

56% Word tentacle is weird. Is her arm trying to grow back or is this a parasite?

62% So if a section of powerline is banished from reality, what does that do to the power grid?

84% It kinda feels like the book is over right now.

85% Interesting that CPS let Wayne stay with nonrelatives instead of putting him in a foster home. When the school decides he's truant, is expect that to change. (I would assume the cops would tell CPS when a single parent is reported missing.)

93% Dissolving the matron's illusion was awesome.

95% They drove to Alaska? I shudder to think what that cost in gas.

I like the solidity of the ending. And I like that the hunting life goes on. I look forward to Book 3
at May 22, 2020