THE BEHOLDER by Anna Bright 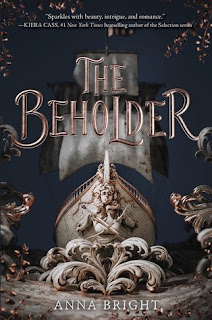 Rating: An epic score played by a world class symphony on the deck of a tall ship.

Highlight of note: A well imagined alt-Earth setting and a swashbuckling crew of sailors.
Will you read more in this series? Absolutely!

Selah is the heir to the nation of Potomac. In her world, England gave up its unprofitable North American colonies when rebels on the other side of the world forced the Empire into a war. I spent a while puzzling as to what went differently in her world and ours. Obviously, the colonies that became the US failed to rebel, or to join together after being released from English rule. There are some things I pegged as different, but overall I think the theme that small things can make big changes is the relevant thing to cite. (I never figured out why England is still England. All the other nations mentioned have alternate names in this world. That didn't dampen my enjoyment of the novel though.)

Despite her deep worry about her father's health, teenaged Selah is sent on a European tour for her after the marriage proposal she offers her local friend is refused. (Europe is still called Europe. I'm not sure why.) During this tour, Selah is tasked with finding a husband to return with. She is to go to at least four places, and this book only covers the first two. The tales at the two stops covered are a bit more like two novellas than two halves of one novel. When the open ending of the book is taken into account, I get the impression that the first (only? Is this a trilogy or a duology?) two books in this series are more accurately described as a series of four novellas. Selah and the crew of The Beholder stay the same, but each court visited comes with a new cast and plot.

I liked Selah quite a bit. She grows over the course of the book and really learns a lot, although she still has a way to mature. The love interests are all interesting as well and the crew of the ship are a lot of fun to read about.

The ending of the book is very much not an ending but a stoppage of narration. Sailing from Norge really didn't feel any more concrete than sailing from England, which happened halfway through the book. There is a solid call to action for the next installment, though, and I'm eager to get started on it.

I entered the book thinking it was a romance. I does have several strong romantic arcs, but by the end of the book, it's the political intrigue that drives my desire to see what will happen next.

Overall, I loved this book much more than I expected to. (I had actually forgotten why it was in my queue and considered not reading it so that I can focus on getting the most of the three months of Kindle Unlimited I purchased on the cheap in December.) What exactly I love so much about it is hard to pinpoint, but it had me enchanted by the time the ship landed in England. My library still lists the second installment as unpurchased, but I've requested it and will probably be right at the start of the line for it when they hopefully buy it.


2% She calls her stepmother her "smother" I love it.

7% So apparently in this world, India flight back harder against the British, which cost England enough money that they abandoned Potomac as unprofitable. Clearly not the only difference in our worlds though as they abandoned Potomac rather than Maryland or Virginia... Also, the Raj was established in the mid 1800s and Potomac seems more like it came of Maryland in the 1600s, so the timeline may have been reversed? England occupied India prior to America?  Except that would have likely resulted in someone else conquerimg the Mid-Atlantic area... This says all of the empires of Europe turned inward when England went broke, but I can't imagine why that would be. So there are several differences in our worlds, but I'm not sure what they all are.

7% Hold on. There are no slaves. Without slavery most of the states south of PA wouldn't have been profitable colonies. So maybe the slaves were freed without a civil war, but maybe they were never there. Which would make the world a better place, for sure, but would also explain why the imperialism didn't work as well in our world and would mean their European North America is little like ours.

7% I wonder why England is called England and Europe is called Europe but nowhere else has the same name as it does I'm our world... ... Except New York, apparently.

8% Maybe it's the word "protocol" being in his description, but Sir Perrault reminds me of C3PO. I assume he is not the Love Interest. And the navigator is too old even if Selah does trust him on sight. I'm guessing Captain Lang is the Love Interest via process of elimination and based on an assumption that he'll be someone who is around the entire book rather than a guy she meets on stop number five of this European tour. So unless Peter comes with them, it would seem like the captain is the guy.

9% Hmm... Godmother send to the the stepmother influenced Peter to reject the proposal. That would make sense. I was wondering why he would do that and was wandering between he loves another and/or he's gay, but he was bribed or threatened would also work.

13% Captain Lang is clearly a good guy who didn't understand what he was being hired for. He is a suitable Love Interest. And one assumes someone who is a Captain at such a young age in a world like that one is a suitable match for her if Peter was good enough. Of course, this assumes he is a Captain and not secretly the last prince on the tour. After all, I noticed that he said he'd never sailed across the Atlantic, not that he'd never been to Europe.

15% These suitors sound like the sort of people who wouldn't leave their homelands... Which I would guess is part of the point.

16% And the Captain has Selah's lost shoe. I'm case the Cinderella vibe hadn't taken yet.

23% Ah. And Selah has figured out that none of these suitors would take her home to Potomac.

24% I too wonder what Anansi (friend of Homer... What's with these names?) didn't say about the state of things in England. I guess we'll find out soon. I wonder if it's related to why there's no picture or age listed for their prince in the portfolio.

27% Lang is very confident he'll manage to get her home. There hasn't been much support for the theory that he's secretly one of these suitors (either one without a picture or one who has been lied about) although I haven't seen much to counter it either. He's never said where he's from, never mentioned his family, never implied how much money he has. And he's obviously the Prince Charming to her Cinderella, so why not be a literal prince?

31% I'm not sold on Bear just being a guard. Could he be Prince Bertilak's son? He seems to have lost his mother and apparently Bertilak is a widower. And Bertilak II would lend itself to the nickname Bear ... Lang could be his brother, although they'd probably look enough for that to be mentioned unless they're only half-brothers... It occurs to me that the reason Lang isn't on this field trip could well be that he didn't trust he wouldn't be outted. If the court is in on it, he could be seen there, but they couldn't tell the whole country.

37% ok, so Selah is starting to crush on Bear. Who i continue to think is not just a guard. I wonder what Lang is up to.

41% Yes, a mere guard scooping the crown prince's intended would be treasonous. So either Bear is an idiot or more than a guard.

50% So Lang is with the mysterious cowslip people and has presumedly been off doing cowslip things. They seem to the be the ones who want to fight the evil empire rather than hide from it. Which explains why he's willing to sail into it.

51% Yep, Igraine is Bertilak's wife. Bear's their son. ... And Selah is not talking being manipulated well.

57% The King of Asgard has an eyeoatch. He's taking the Odin connectiom pretty far, isn't he?

58% And Torden (which sounds a lot like Thor) has a dark haired adopted brother who was born to enemies and describes himself as trouble.

67% Yeah, I really can't imagine this guy moving to Potomac. Plus, we haven't actually established who inherits here. That he's the head if the running stuff implies to me Torden is the heir.

73% I have a bad feeling about these summer rites.

76% Long hours of the night? In Scandinavia just before midsummer?

77% So he's not heir. He just convinced everyone to let him be the suitor because he worried about a shy bookish girl having to live with his brother. That kind of sweet.

78% Ok... That sweet. What's the catch? That he won't go to Potomac? That he dies in the rites? Or will the Beholder crew just kidnap her for the next leg of her tour?

80% So there's a psuedoRussian plot. Maybe it will kill the older brothers and make Torden heir.

91% Ouch. They're willing to compromise but his daddy won't allow it. And Torden probably won't accept being disowned. Also, the king is an asshole.

THE END Love it! Can't wait for the next book!