The BEDEVILED Series by Shani Petroff 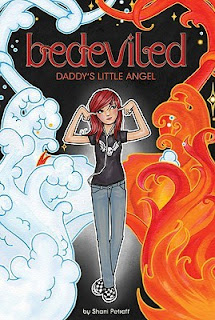 Summary: The daughter of the devil fights against the evil world that is middle school.
Would you read more in this series? I would, but as the last one came out in 2010, I don't anticipate there being any more.

I read this series in one big burst and decided to just do one big review of all of them because I'd be saying largely the same things about them all. Each book has a very similar plot: Angel uses the powers she inherited from her dad, Lou (AKA Lucifer) to try to help herself or her friends, things get messed up by the powers either being too literal or not literal enough, Angel runs around trying to fix the situation, and things eventually work out somehow. The repetitive nature didn't really hurt my enjoyment of the stories though. It reminded me a lot of the Melissa Joan Hart version of Sabrina the Teenage Witch, which I adored despite being an adult before it debuted.

The series is solidly Middle Grade and stars a cast of eighth graders led by Angel, who learns on her thirteenth birthday that her mother wasn't being hyperbolic when she described her dad as the devil. (He had agreed to stay out of Angel's life until she was an adult, then said thirteen counted because several religions say so and because US states frequently try thirteen-year-olds as adults in court. In fact, they're in Pennsylvania, a state which has tried at least one twelve-year-old as an adult, so he could have played this card a year earlier.) By the end of the first book, she has realized she inherited his supernatural powers and is causing chaos with them.

Angel is a vibrant character. Although she sometimes makes shallow and rash choices, it is very easy to excuse them with the explanation that she's thirteen. Her best friend is very similar. When the third book saw her getting all of her wishes granted, she delved into a more selfish place than I expected her to, but I think maybe one of the wishes changed her attitude toward life.

Angel has a love interest who she feels she must hide her powers from. I never figured out why she felt she couldn't tell him. (Again, I was reminded of Sabrina, who did eventually tell Harvey what was going on, but took her time about it.) He was a nice kid, popular but not a jerk. I got a little tired of hearing about how cute he was, but it's hard to fault a tween narrator from getting wrapped up in her crush's cuteness.

The mean girls who pick on Angel are incredibly shallow. I kept expecting to see a hint of more from them and never did. I like to think that if the stories continued into high school, they'd eventually grow into better people. Or at least more complex ones.

The character with the most change over the series is a guy called DL. We never learn what DL stands for, although I have a theory. (His last name is Helper, so my guess is Devil's Little Helper.) He is the boyfriend of the chief mean girl and comes in acting truly awful. But he shows moments of genuine concern and at several times seems to be more aware of what Angel is than he should be. By the end of book four, he seems to be sick of his girlfriend and possibly moving on to Angel's bestie. I found him really intriguing because I never could figure out what he deal was.

Overall, I found the books on the simple side, but was okay with that since this is Middle Grade literature with a young narrator who hasn't learned to see the world in shades of grey yet.

I would be very interested in picking up this story a few years later, maybe looking at Angel's senior year of high school. I'd also actually be interested in seeing Angel's parents star in a romance. At the end of things, they clearly still care about each other and I think it would be fun to see a single mom learning to trust her daughter's father again even though he's literally the devil.

26% I didn't take notes in the first quarter because my phone was dead and the power was out. It went by quickly. I was a little surprised that Angel is only 13 and in middle school since one of the later books mentions prom in the title. Maybe she ages. Or maybe it's a middle school prom?  (Correction: it's and UGLY dress rather than a prom dress. And is for a middle school formal.)

So far, Angel is alright but I'm liking Lou. The devil usually is a show stealer. :)

Also, Angel is crushing on Cole, but I predict Max will be her object of affection by the end of the series.

27% Angel LIKED having the entire stadium sing her Happy Birthday? I would have died of embarrassment. Also, did these girls sell their souls to be rock stars or something?

29% I'd say begging on his knees for his daughter to talk to him is overly dramatic, but Lucifer is typically over-the-top with the drama.

40% Lucifer's face on a volley ball is straight up weird.

60% Yeah, Cole is possibly really shallow. Although it's also possible that he didn't know what else to talk about so stuck to something they have in common.

64% At least she made the right choice when pressed.

65% Why is she believing Lou quit? He told her mom the same thing and was lying then. ... She figured it out it quickly. Ok.

77% The meanness has really escalated.

86% Yeah, you really should listened to your dad, you silly middle schooler.

THE GOOD, THE BAD, AND THE UGLY DRESS

40% I don't seem to be taking notes on this book... Not sure why.  Anyway... I don't know what's up with Cole. But if he doesn't like Angel anymore, it's because of her powers. The bit where they respond to thoughts and fears as well as voices desires is harsh. I would argue she should be homeschooled while she figures them out.

41% Damn, DL is Super Douchebag, ain't he? On the plus side, he'll probably do something awful to Courtney eventually.

42% Mom's cleansing ritual involves vanilla, lavender, and mint, but no sage? No wonder the devil just pops up at will.

57% The dance is two weeks away and being advertised already. I feel it should already have a theme.

80% The adults at this school really seem to enable bullying.

90% Not sure why Cole suddenly has a problem with Jayden being mean to people, but whatevs.

THE END Well, that was abrupt.

BE CAREFUL WHAT YOU WISH FOR

1% Picking up from the last book like that was a scene break and not a jump between novels... The last ending really did just cut off.

7% He said he'd stop messing with innocent souls. Why assume this guy's innocent? ... And the claim it was a joke is actually plausible since "Meant to put him in the major leagues and now he's a ballet dancer/Senator who's trying to outlaw the name Susan" seems like a level of screw up that wouldn't actually happen.

11% Ok, so the cock up really did happen. I don't think Gremory is a good successor...

35% I'm fairly confident that when Angel said Gabi would get a boyfriend too, her powers decided to give them the same boyfriend...

61% I'd been figuring the band sold their souls.  Being demons works at least as well though.

68% I'm not exactly sure why Gabi has gone so evil. I'm guessing maybe the wishing she was a star altered her personality.

82% I'm increasing curious as to who/what DL actually is. This isn't the first scene he's seemed to know way too much in. And maybe he just embraced meanness because it went with his camp persona, the one he named Courtney with. (Could his ID be related to his weird name? DL Helper... Devil's Little Helper? I mean, what kind of name is DL?)

95% I'm was willing to grant that maybe ten years ago kids still knew who Barney was, but recognizing the "You've got mail!" chime from AOL? That seems like a stretch.

96% I'm not really surprised Lou knew what was going on the whole time. He'd be a pretty crappy devil if he didn't, really.

10% I'm tempted to have a panic attack imagining being in this crowd.

17% Hmm... I wonder who Lance's manager is. Clearly someone who recognizes Angel and has powers herself.

18% Oh, dear. Angel is madly in love with herself. And not in a healthy way. You'd think she'd learn to stop doing this stuff.

19% Oh, dear. EVERYONE is in love with Angel. Everyone who was behind her, I'm guessing. Because I don't think Lance is.

37% If I were in this situation, I'd go find that guardian angel who's hanging around. But Angel has shown a lot of reluctance to get help.

38% I guess Lou only cured Angel, not everyone hit with the spell. Oops.

38% Point of fact: I never minded seeing my parents kiss. I really don't understand why anyone is bothered by that.

61% And now Harmony helped fix the problem she helped make. And isn't fixing the rest, but seems to think it'll work out okay.

98% I'm not going to lie, I'd love to see this universe revisited from Maggie's POV. Can she trust the man she used to love, who clearly adores their daughter and still loves her, even though he's the the devil?

THE END
That ending certainly seemed more solid than the earlier ones. I'd be interested in continuing to learn about Angel's life. Maybe flashforward to her senior year of high school or something? She has more control over her powers, but something big happens? Her dad goes missing and she has to take over Hell. Or her baby brother is kidnapped by people who think he's the Antichrist and are trying to start Armageddon, and they transfer all of Lou's powers to the toddler so that Angel has to save both her brother and the world without her dad's help.