THROUGH THE WHITE WOOD by Jessica Leake 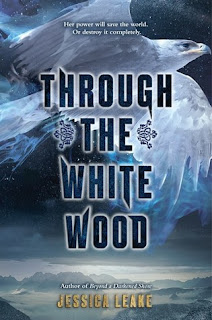 Highlight of note: The main character freezes things, something I liked well before Elsa ever appeared. :) And she's followed around by a remarkably intelligent eagle, which is just nifty. Not as good as being followed by a dragon, sure, but still interesting.

Will you read more by this author? Most likely, yes. There is a previous work that centered around two of the secondary characters in this book that is on my to-be-read list.

This is another fantasy set in a historical Russia. It seems like there have been a fair number of these recently. In this case, the time is approximately a thousand years ago and the place mostly Kiev.

The action starts with our main character, Katya, tied up by her village. The local prince's representatives sweep in and whisk her away to the capital. Despite the fact that they treat her very nicely, even to the point of welcoming the eagle who always follows her around, she assumes she's be taken to her execution. Why execute her? She has magic powers, the power to turn things to ice. It's soon revealed she has used this power on people in her village, so execution would seem fitting if one believed she was truly in control of her power and knew what she was doing. But she wasn't and she didn't.

At this point, I rather wished I hadn't read the description of the book because I would have had no idea where things were going. So in that spirit, I will go ahead and tell you that I recommend this book. The writing is lush and engaging, the characters likable and strong, and the plot engaging. If you want to start it with no spoilers at all, I wouldn't blame you for ignoring the rest of this write-up and finding a copy without knowing anything else.

Okay. They're not leading her to her execution. Which you probably guessed because that would make this book really short considering that our MC is also a first person narrator. The people who were sent after her are knights in the prince's court. They can't freeze things, but they have their own magic powers and are tasked with helping her to understand and control hers. One of them can travel through shadows. One can block magic users from their powers. One can manipulate plants. Eventually, we meet people who can control earth and fire.

The knights are detailed characters and their interactions with each other, the prince, and Katya all seem very genuine. The prince is intriguing and I found myself really pulling for him and understanding why the others follow him. Katya herself is also likable and plagued by personal mysteries that I found myself intrigued by, even though a few of the answers were obvious to me well before she figured them out.

The romantic arc was cute and heartfelt. Was it realistic? Depends on what you mean by that. But it played out well I thought.

The conclusion was satisfactory. It was solid enough to make this very much a stand alone novel, but leaves plenty of opportunity for a sequel. The fact that we saw characters from one of Leake's previous works in this one makes me suspect we may see more of Katya even if she isn't the star of another book.

I did find the villains to be a little too simplistic, which I think may be what made this a book I liked rather than a book I loved. I would have loved to have seen better motives out of them and more conflict with the character who was once close to the prince but betrayed him.

Overall, I found Through the White Wood enjoyable and will be looking for other works by Leake.


Notes
6% I really like this bird. The only way to make her more awesome would be to turn her into a dragon

8% I really wish I hadn't read the cover copy and this didn't know this mysterious prince has similar powers to Katya. It would add a bit more suspense not to know that

18% Whoever selected these tapestries was certainly morbid.

22% Keeping birds of prey on hoods all the time has always struck me as cruel. That puts a damper on this scene, which I assume is meant to humanize the prince by showing him caring about his birds.

28% So fire and ice must work together to save the land. I'm guessing the prince is a fire elemental.

34% This secret exit, which is presumedly also an entrance, does not seem at all secure.

38% The destruction of the village is really gory. Also, our girl should have stolen a horse. Or, hell, asked for one. The prince was begging her to fight these invaders, so he would presumedly have helped.

44% How does this party not have a healer? I mean, I guess maybe the healers died, but they should have been keeping to the back. And, really, shouldn't most of the soldiers have basic first aid if not something better? And shouldn't there be a pack of clean strips for wounds even if the healer did die? These people seem very poorly prepared for arm conflict considering that they were riding out because of an invasion force.

45% I had assumed that Gosudar was a title or honorific people used for addressing the prince, but now they're using it as though it's his name. As in, "Take this to Gosudar." The absence of an article there is confusing me. Google says the word is Russian for prince, so it doesn't seem likely that it really is his name, but then shouldn't people be saying THE gosudar?

47% The prince's name is Alexander. And Grigori isn't just a jerk but actively a bad guy.

54% All this talk of never seeing someone transform into an animal combined with the disclosure that Katya has never seen Elation poo had me convinced the bird isn't really a bird. But it she Katya's mother, her father, or someone else?

63% So... Elation may be her dad. Because apparently Spring could not return his human life and that he's a shadow of what he was and being a bird of prey would fit that.

72% Everytime Katya talks about riding with Elation on her arm, I wonder how hard that is. Just holding your arm out for more than a hours would be really hard, but with an eagle on it? That seems extreme.

75% The Emperesses are pretty dang hurtful. I don't know they really think Sasha killed his folks, though. I suspect they just want an excuse to brush him off.

78% There's something really sexy about the prince's new power.

85% Elation is male and had more advanced thoughts than animals ever do. So, yeah, pretty sure he's Katya's dad.

THE END
I'm not sure why Katya even tried to leave without Sasha. He knew where she was going and would obviously have followed her.

The ending is sweet. And solid enough that it doesn't require a sequel while being open to one.