SISTERS OF THE WINTER WOOD by Rena Rossner 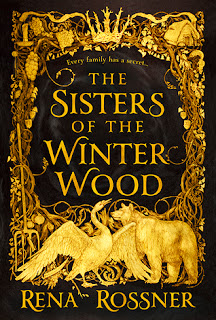 Will you read more by this author? Absolutely!

Warning: The main characters face a lot of antisemitism, the depiction of which is vital to the plot but which may be disturbing to some readers.

It's been a while since I finished this book and I'm not sure why I took so long to sit down to review it. I think part of what happened was that the day after I finished reading, while my mind was composing something that would discuss the irrational hatred the Jewish characters in this book face, a man walked into a synagogue and attacked the people worshipping there, very much bringing hope the heartbreaking and infuriating fact that the world is still full of dangers for those of Jewish persuasion.

Clearly, the faith of the main characters is part of what is sticking with me about this book. I felt Judaism was portrayed in a loving light, which is appropriate as the author is herself Jewish. I was reminded more than a bit of Niomi Novik, who also writes strong Jewish leads in magic-touched historic European settings. It makes me happy to see an uptick in this sort of Jewish magical realism.

The tale is told in alternating chapters by two sisters, one of whom inherited her their father's ability to shift into the form of a bear and the other of which takes after their mother and can become a swan. The swan-sister's chapters are told in poetry, which makes it really easy to see who is speaking when.

Early in the story, the sister's parents are called away to another town. Lacking travel permits means that the journey is inherently dangerous, so they leave the children at home. Almost immediately, both of the girls are thrust into romantic arcs. The bear-sister is courted by a boy who is properly Jewish but of whom she doesn't think her father will approve while the swan-sister becomes involved with a mysterious fruit seller. Despite the horrible antisemitic things the fruit seller and his brothers say, the girl becomes obsessed with him to a degree that is clearly unnatural.

I found both sisters to be well portrayed and sympathetic. I really liked the character of Dovid, the bear-sister's love interest, who was very supportive and understanding. The swan-sister did a few things that didn't make much sense, but it's easy to explain them with the magic that was clearly going on the entire time.

The plot was engaging and ended in a satisfactory way. I did feel the ending was a little open for something that doesn't seem like it would have a sequel, but it wasn't upsettingly so. It was more in a way that makes it clear life is going to continue and lets you decide how that will happen yourself.

The antisemitism goes beyond unkind words. The Jewish characters are actively targeted by multiple people in multiple situations due entirely to their religion. It's alarming, to say the least, but most certainly an accurate portrayal of history. And, as we saw this Passover, of the present. I don't feel that the book dwelled overly much on these issues though, but rather treated them as something that the characters were forced to accept and live around.

All in all, I recommend this book to people who enjoy a good historical setting for fantasy tales. The only thing I would change would be to put the guide to Yiddish at the front of the book rather than the back as there were multiple words I couldn't get from context and felt compelled to google as I didn't realize there was a glossary in the book.


Notes
2% I liked the opening about the cemetery. It was a nice piece of mood setting. Not sure about the second chapter. Is everything from Laya's viewpoint going to be poetry?

8% Whoa. Their mother is a were-swan? That's cool. And their daddy is a bear! Even cooler! I had thought it was the converted-to-Judiasm thing his family was being snoby about, but apparently she's the wrong kind of shifter.

12% I don't like this "he's not your real father" wording. He raised her and clearly loves her. She's his daughter. He just wasn't the one who sired her.

28% I wonder why the otherworldly fruit sellers care of girls are Jewish or not.

31% It's the next day? Did Dovid come over or not? Why isn't this established in the opening paragraph?

42% I really want to know who/what these fruit sellers boys are. Golblins maybe? They remind me of goblins from another book I read recently.

48% I'm curious about the bear that came into the house. Could he be tryings tonpqrotect the girls while their parents are away or is he a threat?

51% the swan's shadow breaks the illusion. Interesting. Too bad Laya's too far gone to notice. I wonder why the swan doesn't interfere more.

55% Laya's realizing the fruit boy doesn't love her. That's good. Will it lead to her seeing through the enchantment?

56% Is this vision in Laya's head or really happening? Is this young male swan her mate?
... I'm going to go with it was in her head but the male swan is real.

59% I really do wonder what's up with the fruit boy's antisemitism. Perhaps Jewish people have special powers they can use against whatever these guys are? Wouldn't that be cool? Special Jewish anti-goblin magic?

59% Fedir will help her? Really? He doesn't seem to want his brothers to know he said that, so maybe? He does seem sad, presumedly about Laya.

62% Holy shit. Fedir turned into a cat. I did not expect that.

63% Koroleva? Google says that's a name. Does Laya have a different name in Swan?

67% Ok, I can get why no one's thinking, "This is the work of vampire cats!" But how are the justifying thinking it's a bear?

77% The cat shifters don't just hate Jews; they hate humans. I didn't actually expect they were trying to get humans to destroy themselves.

82% "In general, I find that when you want to get to know a girl, it's best not to kidnap her first." Excellent observation.

88% So Fedir died because he let Laya go? Whoa.

89% And the parents are suddenly back! Yay?

95% THE END
I'm curious how the Rebbe is going to react to Dovid, but I guess he already didn't kick the boy out of the house during all this resolution.

I'm worried about where things left off, but I guess it's a good enough stopping point. I would have liked a last poem from Laya, perhaps in America or at her wedding.

AUTHORS'S NOTE: The afterword is interesting and provides historical context. Apparently not only is the town, Dubossary, real, but the Christian kids who died were too and one of them was drained of blood before being left in a fruit orchard. Apparently Jews were blamed because of a belief that they use goy blood in matza. (WTF? How could anyone believe that?) The local Jewish community successfully fought off a murderous mob, but in several twins nearby the Jewish communities were slaughtered.

35 years later, the Nazis arrived and slaughtered the entire Jewish population of Dubossary. All six thousand of them.

The author mentions this because she didn't chose her setting at random. This is where her family was from. Her great-uncle immagrated to try US in 1905 and convinced most of his family to join him, including the author's grandfather.

...And then there's a Yiddish guide that I rather wish had been linked from the words used in the novel. Most of the usage was followable by context, but there were a few u wanted defined and wound up googling since the onboard dictionary didn't know them.