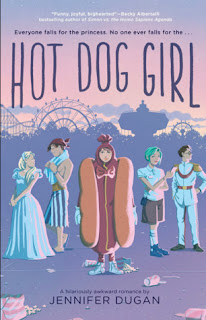 Highlight of note: The main character is a bisexual in a hotdog costume at a low-end theme park. What more hook do you need?

Will you read more by this author? Probably. Her earlier works are comics and have an odder vibe (they apparently start with the rather cliched dream-lover-is-real concept) but are still LGBTQ (the lover the MC shares dreams with is nonbinary) and I liked her style, so I'm willing to check them out when I get time. I put them on my "Want to Read" shelf on Goodreads.

If you look at the cover of this book, it was obviously something I would have been willing to read as soon as I saw it. I mean, that image! Poor girl in the hot dog suit! I needed to know more!

I'm pretty sure I saw this book on an LGBTQ recomendations list, but I'd forgotten that by the time I actually got to read it. Consequently, while I knew the best friend character was sapphic, I didn't realize the main character was bi until about a quarter of the way through. Up til then she'd been pretty focused on the crush she had on the diving pirate guy who was dating the park Princess, only mentioning exes and never discussing names or using pronouns for them. (We'll ignore for a second what it says that a panromantic such as myself was assuming heterosexuality in a character...)

This book seems like it would be predictable, but I was actually uncertain who Hot Dog Girl was going to end up with for much of the story. I assumed at first that the crush would be an ass and there was another love interest, but when he turned out to be a great guy, I thought maybe it was just a "hooking up with your crush" book and the main conflict was from other aspects of growing up and dealing with impermanence. But then I learned the MC was bi and suddenly started wondering about some of the sapphic best friend's attitudes, especially when a "Let's fake date to make him jealous!" plot was hatched about a third of the way in. Was this a "Grabbing your crush" book after all or a "hooking up with you best friend / ending up with the person you fake date" book? It really could have gone either way for most of the story. I won't tell you which one it is, but I will tell you I was absolutely happy with the ending. The couple goes into a happy zone and the person Hot Dog Girl doesn't end up with is also in a pretty good place.

The book is mostly about changes and how to accept them. This is brought about by the closing of the amusement park. The teen workers are upset, especially our main character, who has abandonment issues thanks to her mom leaving when she was young and who consequently views the park as a more stable place than her home. She launches into a drive to save the place, dragging the other characters along with her enthusiasm even though the park owner isn't interested in keeping the place open no matter how much money she raises.

The main character is sometimes clueless and sometimes rash, but she's convincing as a teenager whose passions sometimes kick in before her logic. The rest of the cast is likewise realistic, relatable, and likeable.

Overall, this is a fun book that leaves the reader with a happy fuzzy feeling, so I highly recommend it to those who like contemporary YA romances.

6% I'm not sure I'm sold on Eloise's obsession with a guy who's into someone else, but I'm loving that his car broke down in the rain and she rescued him.

19% Heat stroke during a job that would be a nightmare for me. I feel much sympathy.

25% Everyone is doofy, straight, or in love with her friend? Is Lou into girls? The only person she's named herself as being interested in is the one guy, but she could totally be bi...

27% Hmm. Lou took a class because a girl she liked was in it. I guess she is bi.

30% Oh, dear. So Lou's fake dating her best friend to make a guy jealous. And presumably the bff is going to go along with it to give her an excuse not to date the girl she went out with last night? Who will probably be all hurt but also confused because Lou's the one who set them up.

31% I'm really happy bff isn't wanting to go along with this horrible (and cliched) idea. Although I'm kinda starting to hope she's pissed because she'd rather date Lou for real... And Lou has repeatedly described Seeley as attractive... So BFF could actually be the love interest...

41% Yeah, I don't know there's a way to convince a guy to keep a business he doesn't want going. They could maybe become a co-op? But who would run it? I don't see things going well in the save-the-park arc.

41% Whoa. The yelling at her dad here is so seriously uncool. At least she figured that out as soon as she'd said the hateful things.

43% Yeah, I think the tension with Seeley could be romantic...

49% I can't help but think that a GoFundMe to help Mr P would do better if we had any idea what his actual problem is...

58% I can see how all of Seeley's talk that people see and value Eloise could be seen as just being a friend, but it really seems love-interest level of passionate.

59% And we have confirmation that Nick's girlfriend is cheating on him. ... I'm really liking Nick, but I'm not so sure about Lou ending up with him. I really do want her with Seeley.

62% Yeah, I officially feel bad for Ari. The girl he's been into for five years is finally willing to kiss him, but is officially dating someone else. Apparently has something to do with her whackjob mom. So he gets to watch her being all cute with this other guy while not being able to acknowledge him.

68% "If he's your Seeley, you should be with him." Uh huh. Apply that to yourself, please, Louise.

72% Yeah, it's starting to be implausible that Lou doesn't realize she's into Seeley in a girlfriend kind of way.

73% Okay, after a kiss like THAT she's gotta figure this out.

83% And she's finally talking to Mr P! And lo he is closing the park for personal reasons and not because he needs money. And lo the microchip plant would provide more energy to the local economy than his theme park.

93% I'll take all this making out at the apology being accepted. :)

Everything ties up pretty well with lots of cute happiness.