CARRY ON by Rainbow Rowell 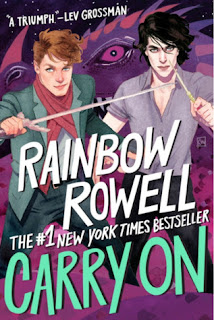 Highlight of note: What could easily have been a shallow Harry Potter rip-off actually took on life and substance in its own right.

Would you read more by this author? I plan to, yes. Although I am sad there's nothing else set in this world.

This book was recommended to me in an article of LGBTQ+ stories not to miss and I started it without knowing its background. That background is kind of important though. In another novel, Rainbow Rowell has a character who is obsessed with writing fanfic. Rather than use an existing fandom, she created one around Simon Snow, a wizard who goes to a school of magic and who is very hard to tell from Harry Potter.

While I haven't read that book yet (Fangirl) I've read other books that use imaginary fandoms that left me really wishing the thing were real, so I think it's pretty cool that Rowell went on to write an actual Simon Snow novel.

We start off in his final year of magic school with plenty of references to exciting things that have happened in the past, so it really feels like the final book in a series. I would almost ask why not tell the whole thing, but I think that would just be too much. Also, this final installment is largely a romance. One of the pair realized he was in love years ago, but the other one didn't even realize he experiences same-sex attraction until partway through this book, so early books would have had a different focus and Rowell appears to be like me in that she really only wants to write romances.

The parallels to Potter are many and I think it's inevitable that a reader would start off comparing the two. Oddly enough, it didn't take me very long to get sucked into this though. (Heh. I said "sucked." That's funny because one of the main characters is a vampire.) The characters seemed truly genuine and fully formed, the plot moved along nicely (especially after Baz's appearance), and the conclusion was satisfactory. I'll admit I foresaw some things that were probably supposed to be surprises, but I think most of the clues were subtle enough that someone reading more casually might have missed some of them.

Overall, I really enjoyed this. Much more than I expected to a few chapters in while I was still going, "OK, so it's Harry Potter except Ron's a girl and is dating Harry? And Harry and Malfoy are roommates.... Gotcha." This could very easily have devolved into mediocre fanfic, but I was pleasantly surprised to really like it. In fact, I wish this was more in this universe about what happens after the novel's conclusion.

Below you'll find the notes I took as I read. Clearly, they contain major spoilers. (Although the 4% update is simply a catalog of similarities to Harry Potter  if you want to see what I mean about those.)

4% So, they've dropped us into Harry Potter Book Seven... Or I guess maybe eight as they spend eight years at this school rather than Hogwarts' seven. Although it's established that weird exciting things have been happening since he started the school, we begin in Simon's eighth year.

The Potter parallels are many and obvious. An orphan of unusual power, an English school of magic, and an old wizard mentor who insists on sending kids home every summer even though they're in the middle of a war and thinks suffering in the non-magical world every summer is going to help our hero...

There's a Big Bad Guy. Apparently he can summon Simon and did just before summer break last term but not since, because he also works on the school schedule.

Simon has two good friends he hangs out with all the time. They're both girls, one whom is super-smart and the other of whom he's dating.

His favorite things about school include magically awesome food and sports, although at least he plays football rather than some weird made up sport with broken rules. (If you want a rant on the importance of game balance, we can have a discussion on how the snitch breaks quidditch.) Also, he's not a sports super-star, although his roommate is.

The roommate comes from an old magic family with snooty attitudes and a belief that people with inferior bloodlines and less magic power shouldn't be mixing with them. He's wanted to kill Simon since they met but apparently hasn't gotten around to it yet despite living with him for seven years.

And Hagrid is female and keeps goats instead of weird and dangerous magic critters.

So basically, it's Harry Potter except Harry plays football poorly, rooms with Malfoy, and dates Ron, who's a girl in this universe. Oh! And is willing to use the word "fuck."

I'm not sure how I feel about all of this. I think it's supposed to be a humourous take on everything, but it doesn't feel comedic.


5% Simon just beheaded a goblin can driver. So, certainly a higher level of violence than Potter. Also, the spells are apparently all based on song lyrics and movie quotes, which is interesting.

9% Chapter 6 is three lines from the perspective of someone named Lucy. We have no idea who she is.
10% The Mage says that the Humdrum only attacks while Simon is at school. Also, the Old Families are threatening to rebel against his rule. (He is not only headmaster of the school but whatever this universe is calling the Minister of Magic.)

12% The veil between life and afterlife is thinking and ghosts are crossing it. I'm guessing this explains Lucy.

13% Chapter 10 is one page from the Mage's point of view and is about how he's trying to figure out how to protect Simon. But he says "I could hide Simon from the Humdrum itself." Which implies he's letting the Humdrum find Simon over and over. Perhaps he's hoping Simon will come into his full power if threatened enough? Which leads to the question of what he wants that power for. (Also itself. Not himself. It's seeming more like the Nothing from Neverending Story than Voldemort. Although sometimes it looks like Simon.)

25% "I can't break up with Simon for a Tory vampire. My parents would disown me." Lol. And I'm sitting here wondering which is worse, the Tory part or the vampire bit? Because I could make an argument either way.

28% I don't think the Baz's mom's ghost came back. I think that was Lucy. And I think she's Simon's mom. Also suspecting Davey (aka the Mage) might be his dad. I'm less sure about that. I don't trust him though.

29% Baz just narrated that the Minotaur was trying to cow him. ::Snicker::

40% I've been wondering about these raids the Mage is conducting. Penny's mom connecting them to the Nazis helps solidify this distrust. I am far from convinced the Mage is the good guy. When you add in Lucy calling his rise to power a revolution, I'm starting to wonder if he killed Baz's mom... I'd suspect him of controlling the Humdrum too if it weren't for Chapter 10. The way he said he could hide Simon from it didn't sound like he was commanding it.

52% Um... The magic peeps at my know anything about Christianity and celebrate Samhain. So why do they observe Christmas? (And we did it take me so long to question that when it's been referenced before?)

66% That was a fantastic first kiss!

72% " ...but their whole love-triangle dynamic is so persistently stupid, you can't blame me for blocking it out." Lol, Penny.

79% Arresting Ebb seems like it's going to cause the Mage a lot of trouble...

82% I think I'm understanding the link between Simon and the Humdrum. Simon is super powerful because he drains the energy from places. I'm not sure why the part of him that drains things seems to have a personality though.

85% I was right about the Mage being behind Baz's mum's death. Go me!

98% THE END It's a really sad that Simon never got to hear any of what Lucy was trying to tell him. He doesn't even realize who his parents were... But the rest of the ending made me happy. :)