CINDERELLA IS DEAD by Kalynn Bayron 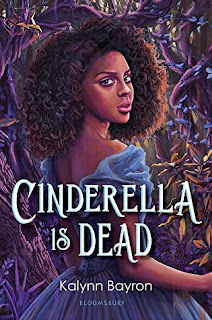 Rating: A slipper that you thought was Swarovski crystal but which turned out to be from Hot Topic. (AKA, Acceptable but a little disappointing)

Would you read more from this author? Possibly.

The strong point of this novel is its setting. In this world, Cinderella is an idolized though dead queen. You know her story as it's told in this land already: a hardworking and deserving young woman attends a ball with the help of a fairy grandmother and catches the eye and heart of the crown prince. In honor of this, a ball is held every year at which all the unmarried women between the ages of sixteen and nineteen, who are legally required to attend, will be leered at by any man who wants a young wife and possibly forced into wedlock. If a girl attends three Balls without being selected, she is instead forced into slavery. The importance of the Cinderella story in this world is comparable to that of the Bible in a conservative Christian society, with every family owning at least one high quality copy and young children being quizzed on it at every opportunity.

Clearly, there's a lot wrong with this government. Sophia, a young lesbian, not only questions the Ball and the appropriateness of horrid old men being able to point at a teenager and say, "Her. I want her!" but isn't even certain the historical account of Cinderella is accurate. Fairy godmothers? She's never seen any evidence of magic.

After fleeing her first Ball, Sophia meets, and is instantly attracted to, a descendant of Cinderella's beloved step-sister, who confirms that the story we've been told is a long way off the truth.

Cinderella's story is intriguing and has a lot of fascinating ideas in it. Sophia's story, I found less captivating though. The romantic arcs were lackluster, lacking depth and chemistry, and Sophia's main character trait is moralistic outrage. I honestly cared more about figuring out what happened two centuries ago than I cared about what was happening in the here-and-now.

I was sad not to connect more to this book. I found the themes too preachy and in-your-face while the characters lacked in complexity. To be fair, this is set in a fairy tale world, so maybe I should have been less annoyed at how basic the villains were, or how naive it was for the heroes to assume their society would be fixed by simply removing the monarch, or how over-the-top the bad elements of the portrayed society were. However, I found no subtlety in this book at all and felt more lectured at than entertained. Worse, I felt lectured about things I already feel are obvious truths, so it was in no way thought provoking.

The plot is reasonably paced outside of the romances and had a few interesting surprises, but without caring more about the characters involved it was hard for me to really be compelled by it. And the conclusion... Well, it ends like a fairy tale. That may actually be my favorite part of Sophia's story.

I don't regret reading this book. As I've said, I found the idea behind it to be a strong and interesting one. I just wish the execution had landed better for me.

10% The Cinderella story to Bible parallels are kind of fun.

15% The sexism is taken to a level that seems really preachy. I think I would have liked a little more subtlety to it.

18% It does seem like marrying the guy that would make some amount of sense for both parties since being single is apparently not an option and marrying someone of your own gender is right out.

21% They have a religion other than Cinderellaism? It doesn't seem held in much regard.

23% To be fair to the men, we were told earlier they can only enter approved unions and many parents seem like they'd want their daughter at this event before agreeing to a proposal. So being there doesn't necessarily mean they like it. And at least the younger ones are unlikely to really understand what the girls are going through. Or maybe they're trying to help someone by saving her from someone abusive. I can see a lot of motives beyond them being irredeemably awful.

23% A town that only raises heirs sounds interesting in a terrifying way. I'm also intrigued that the king chooses his successor. Do they usually not have children, then? And what's up with Price Charming not remarrying after Cinderella died young? Was he gay or really that much in love with her? (Did she even die young? No one knows where she's buried so maybe she ran away with her girlfriend? How gay is this story?)

28% An old woman in the room they took Liv to? Is the king draining people's youth or something?

29% Could the crying woman be Cinderella, kept alive by magically draining other women? Or is it someone there to be drained?

45% You go, seamstress! "I would die to give even just one person the chance to be free from you."

63% If the witch didn't send for Charming, one does wonder how he knew to go to her. Also, hasn't she paid back her debt enough to be willing to kill him by now? But she didn't even try. Does she not want him dead or is she less powerful than has been implied?

66% I interpret the prophecy as being that Charming will drain Sophia's energy like he did to Liv. How to get around it and recover from it, I don't know.

72% Why does Sophia think women will suddenly have rights if the king dies? Is she really that lacking in basic understanding?

82% So stabbing the guy in the chest does nothing. Decapitation seems worth a shot. Even if he's still alive, it would be easy to steal his head and assume people won't continue to be ruled by his body. Fire also sounds promising. He saved the witch from being burned alive, didn't he? So maybe now she'll die making sure he burns to death? Would be poetic.

90% I would have maybe sent the journal with the escapees so that the public can read how horrible the king is. Although Sophia did skip pages so there may still be a clue in it

93% Like Constance, I feel silly for not connecting the boy in the portrait. I guess the witch will be dying to kill the king though. And possibly still through fire.

94% So I guess Amina was helping. She knew she'd die and didn't alter course. Maybe she really was sorry and really did like Sophia for some reason.

98% The ending is nice. Realistic? No. The transition of power would be much harder and bloodier, and the resulting government might but be all that great. (Seems like a great opportunity for women to get revenge, v didn't it?) And not all of the bad people would be punished or the good people saved. But it's a fairy tale. It's not supposed to end realistically. So although I don't believe that the new government went into power with few hiccups and ruled fairly ever after, it's not like I believed the original Cinderella ending was realistic either. Realistic isn't the goal of a fairy tale ending. Idealism is. And it's good to see that a modern girl's idealism is now about equality and rights rather than marriage.
at December 22, 2020