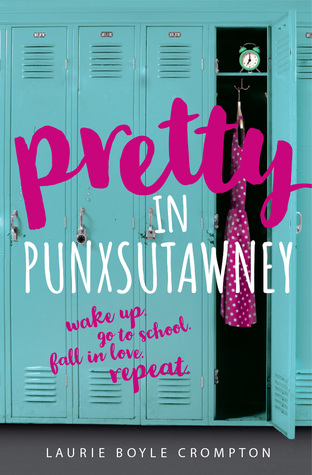 Rating: A big tub of perfectly buttered popcorn delivered to you at the end of an elaborate dance number starring your entire school during which you managed to get all of your steps right.

Highlight of note: It's Groundhog Day meets Pretty in Pink.

Will you read more by this author? Oh, yes!

If you loved Groundhog Day half as much as I did, you're probably on board already. You might be looking askance at the Pretty in Pink part though... I'll admit that Pretty in Pink is my least favorite John Hughes movie, even though I will admit it has aged better than Sixteen Candles. But I loved this book, so don't let that hold you back.

You don't really need to know either movie to enjoy this book. The basic concept is that Andie (it pains me to spell the name that way, but that's how she does it) has a crush on a guy who works in a movie theater. (Where he works is important because Andie is obsessed with films.) She's determined to hook up with this guy and when he offers to play her tour guide on the first day of school, it seems like the perfect chance to finally get his interest! But everything goes wrong, from the moment he picks her up in the morning until when she collapses in exhausted tears that night.

When Andie wakes up the next morning not in her bed in the pajamas she put on after her horrible no good day but on the couch where she woke up on the first day of school wearing what she was wearing then, she's more than a little confused. It soon becomes obvious that she's repeating the day.

Like Bill Murray in Groundhog Day, she winds up repeating a lot. Near the end, she guesses she's been reliving the same day for what would have been the entire first semester of school. Also like Bill Murray's weatherman character, she gets to know absolutely everything about her peers and her goal by the end of the ordeal is considerably different from her goal at the start.

The one unbelievable thing I found in the book was the part of the backstory that said Andie had never seen Pretty in Pink until the day before her loop starts despite the fact that she knows she was named after the main character. It's explained by her mother keeping "special" DVDs in a locked cabinet and only breaking them out when she deems it the right time. For Pretty in Pink, that day was the night before the first day of Andie's senior year of high school. But... Well, there are a lot of places to see a movie without your mom. My sister was named for the lead in a smutty romance that she was absolutely not allowed to read in middle school, but totally did. Once the parent has made the mistake of telling the offspring where their name came from, said offspring is going to find the source material. Especially if they're a film buff named for someone in a famous movie by a director whose other works she's liked. Yeah. The fact Andie hadn't seen that movie before was WAY more strain on the story's credibility than her getting caught in a time loop. The author could only have sold me on that by making the only Hughes movie Andie had seen Sixteen Candles and letting her be turned off by the racism and rapeyness in it. But she had seen his entire catalog minus the film she was named for.

Otherwise, I found little to complain about. Andie is a smart girl with a good sense of humor. She has questionable taste at times, but she learns a lot during her looping and ends in a really good place. And the love interest was pretty fantastic and easy to pull for. I didn't swoon over the guy, but that's probably because of how much he reminded me of my son. (It takes Andie too long to realize he is the love interest, though it was obvious to me from the first time I saw him. That sort of thing is common enough in romance that it didn't bug me as how one gets to the conclusion is still fun even when you know where things are going.)

The secondary characters are a little shallow, but it feels deliberate. Andie's school is overrun by cliques and many of her fellow students feel like stereotypes when introduced. We learn things about them, but it's not a long book, so we don't get too many details about anyone and I still ended up labeling them in my head as things like "cheerleader" and "goth dude" and such. Andie gets to know them, presumably more than is on paper, and starts doing things like match-making between sets as she finds herself on a crusade to make the whole school get along. So, basically, everyone around her is walking around in a John Hughes movie, but I'm okay with that because it's what makes the theme of not judging people by their aesthetics and friends groups possible.

Overall, I highly recommend this book to fans of the source materials and people who like cute teenage romances.


NOTES
0% I'm not a big fan of Pretty in Pink despite sharing a name with the main character. It's probably my least favorite Hughes movie, although it may have aged better than Sixteen Candles. But I worship Groundhog Day. Maybe if the chick in Pretty in Pink got to replay the movie over and over she'd wind up with Ducky instead of Bland Popular Boy and I'd like the movie more. (Note: originally Ducky did get the girl. But test audiences where dimwitted and don't know what love looks like, she they redid it to end her with boring shallow guy.)

10% Tom saying to give Duckie his best made me laugh as he's got a strong Duckie vibe going. It does not seem to have occurred to Andie (that spelling is like nails on a chalkboard) that her meetcute with Colton was also a meetcute with Tom...

11% Wait. It's the first day of her senior year of high school and she's never seen the movie she's name for before? That's really weird.

16% Waking up in the dress seems like a good reset point.

17% Yes! Andie has the same opinion about the ending of Pretty in Pink as I do! Good girl.

21% Yep, Tom is totally Ducky. I adore him. I hope the author agrees with me and misspelled Andie about who should get the girl in the end.

21% Tom is wearing "what must be his lunchtime fedora." ROFL. Yeah, this guy is awesome.

26% The idea that Punxsutawney Phil is some kind of god is pleasing to me.

35% Interesting Andie assumes the DVD is part of what's going on while I figured it was the couch. A couch that just arrived from a thrift store seems more like an enchanted object to me than a disc that's probably been viewed by the mom before even if Andie had somehow never seen it.

38% I'm worried about Andie's dad... He seems a little more depressed each redo.

39% I hope one of the first things Andie comes to learn is that Colton is in no way worth repeated mild food poisoning.

49% Huzzah for figuring out she's not meant to be with Colton!

65% Tom just verbed Breakfast Club in the exact same way Andie has done. Why hasn't she figured out he's the love interest???

68% Why is this band in possession of a bass when no one in the band plays bass?

80% I hereby formally request that my retirement home contain an arcade and a theater room.

81% She has now learned that Ducky was supposed to get the girl. Will this help her realize she needs to hook up with Tom?